That's really the only word that can describe fans, players, staff, and the head coach of the New York Rangers tonight, as the Flyers easily dispatched them from South Philadelphia with a 2-0 shutout victory. Ray Emery was solid in earning the goose egg, and the Flyers did an excellent job in limiting the Rangers offensive opportunities.

But none of that will be the lasting story in this one. No, a tame contest lit up in the second period when a scrum around the net boiled over. New York star Marian Gaborik engaged with and antagonized Dan Carcillo. Of course, when Gaborik dropped his gloves and Carcillo wasted no time in pummeling him into the ice, those intelligent folks up the Turnpike saw things a little differently.

Like I said: delusional. And it's not really a case of 'he said, she said' here either. (By the way, the person named Marian is totally the 'she' here.) No, there's video proof, which means that enterprising individuals take it upon themselves to turn said video in still image proof. 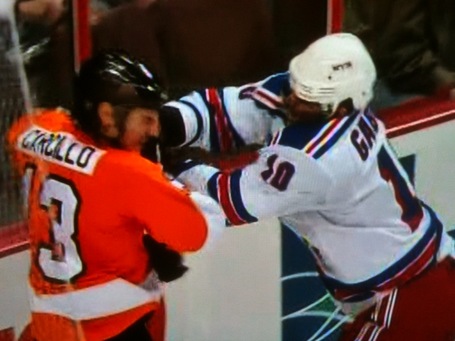 Oh, you shouldn't have unleashed that fury, Marian.

Seconds after the frozen moment in time you see above, Gaborik had a nice little meeting with the ice, courtesy of number 13 in orange, before heading off to the penalty box. Carcillo said after the game that he was "lickin' his chops" when Gaborik dropped his gloves. Say what you will about that (and I'll say that I love the honesty), but even from a strategy perspective, when you get a chance to take the opposition's best player off the ice for five minutes, you do it.

But don't bother the Rangers with that logic nonsense. Of course, when your media twists Carcillo's words to say that the Flyer was licking his chops the entire game to get at Gaborik, and when your announcers and your team's PR staff are feeding you these same delusions, those poor NYR fans never really have a chance.

After the jump, we'll have more on the game, questions with answers, a look at the playoff picture, and the comment of the night.

Back to the game now.

The Flyers had a ton of chances and probably should've put more pucks past Henrik Lundqvist, but Jeff Carter missed the net on several strong chances and Lundqvist, of course, came up big often. Regardless, the Flyers controlled the flow of the entire game and, as mentioned, kept the Rangers chances to a minimum.

James van Riemsdyk's breakaway goal in the first period was the result of a risky-but-gorgeous stretch pass from Chris Pronger. JVR flubbed the initial deke a little bit, but Lundqvist gave up a rebound and the rookie was sure not to miss his second chance at putting the puck in the net.

Ray Emery had his first real solid game since his return from injury. He wasn't challenged much, but when an opponent comes into a game with 14 goals in two games and you wind up shutting them out, you can be sure your goalie did a few things well.

There were more fights, too. Sean Avery was demolished by Scott Hartnell without even getting a punch in. Avery apparently hadn't had enough, because about seven minutes later he went after Carcillo. The two fought to a draw, but Carcillo said after the game that he couldn't throw punches at Avery because he cut his knuckles on Gaborik's helmet earlier in the game. Finally, three seconds into the third period, Arron Asham dropped 'em with Aaron Voros, and Asham handled himself despite Voros having a clear size advantage.

It was a solid overall game for the Flyers, who went 2-0-2 in the fights, 2-0 on the scoreboard, and picked up two points in the standings. What else can you really ask for?

With the win, the Flyers now have 53 points. They move within two points of the Rangers, who still sit in 6th place with 55 points. Boston lost in regulation to Columbus (thanks R.J.!) to drop to 7th place with 54 points and the Islanders won in the shootout to gain two points and move into 8th. Ottawa beat St. Louis to give themselves a three-point gap of breathing room up in 5th place.

Thanks to the win by the Isles, though, the Flyers are still on the outside looking in.

my ex telling me she only slept with 2 other guys.

the other 20 didn’t count