Simon Gagne scored his sixth goal of the season tonight. The record won't show that, though.

With the Penguins on the power play in the second period of tonight's 7-4 Flyers win, Gagne poked at a loose puck in the offensive zone from his position along the goal line. The puck found it's way to the right goal post, where it met the pad of Pens goaltender Brent Johnson, who a second later found himself in the net with the puck.

It was a goal. There's consensus on the subject from every corner of the Internet.

Obviously, Flyers fans thought it was in, saying in the Broad Street Hockey game discussion thread tonight that, among other things, "it looked in" and "that was so in." Typically though, fans of the other team --especially those in Pittsburgh -- won't agree with us on these things.

Cue comments from the game thread over at Pensburgh:

That may have gone in

Phew! We dodged a bullet there. That should have been a goal based on what I just saw.

As you can tell by that last comment, the Penguins did indeed catch a break, as the NHL said it was not a goal, ruling that the evidence was inconclusive. It's an understandable rule for sure, and when the initial call on the ice is 'no-goal', it has to be completely, 100 percent, without a doubt, unequivocally, conclusively, insert more adjectives here, a goal. On this play, league officials said that wasn't the case, despite the fact that Johnson was completely in the net and that he pushed his body out into the crease while the puck followed.

But, okay. The puck wasn't seen in the net from any angle, and even if it was, it wasn't seen completely over the line, thanks in part to Johnson's black, puck-colored pads. Or was it? Here's The Pensblog on Twitter -- and yes, we're talking about that same The Pensblog.

love how FSN just showed the puck in the net replay

Yep, FSN Pittsburgh showed an angle, live on television, that put the puck in the net. Check the end of this video to see. Of course, the NHL cut it out of the video above. CSN Philly showed the exact same angle, and thanks to a few intrepid folks, we have screen captures of this angle.

If you watch the video again, you'll see the puck hit Johnson in the right pad (kind of, Evgeni Malkin's goofy face is in the way) as the goaltender slides back beyond the goal line.

Matt P of The 700 Level put these up on Twitter. 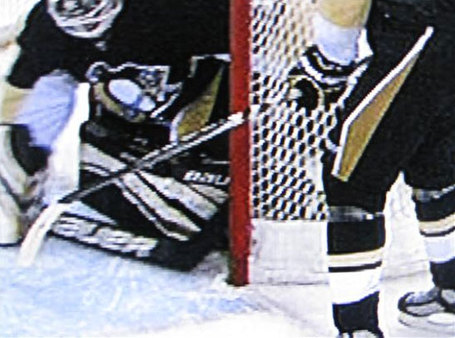 From that look, you can't see the puck. It could be anywhere, including underneath his leg in the crease there. But here's the next screen cap from just a second later as Johnson slides his body out of the net. 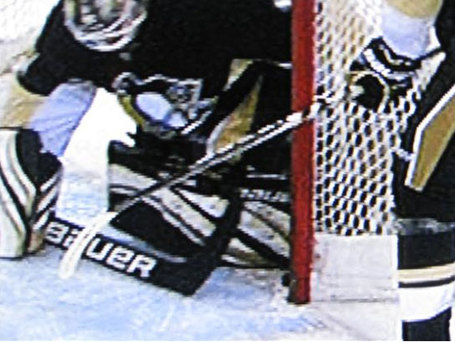 Hey there, puck. How you doin'? Clearly evidenced by this second screen cap, the puck is on the ice and not under Johnson's pad. Still, the photo is grainy and by rule the entire puck has to be across that goal line for it to be a goal, forgetting the fact that the previous photo proved Johnson was further back in the net and far enough behind the goal line to prove that the puck wouldn't have been on the line.

It's not like we have high-definition television sets with crystal clear pictures these days, affording us a perfect view of the puck across the goal line. Here's a screen cap courtesy of jello44, who posted this in our game thread tonight. 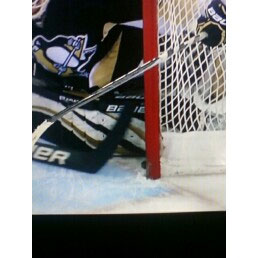 That's the puck. It's in the net. This angle was broadcast on national television in the United States and on regional television in Philadelphia and Pittsburgh. Millions of people were afforded this view. If we caught it, there's no doubt that officials in the NHL's war room caught it. Yet they still said that the evidence to overturn the call was inconclusive.

You can argue that, even in that clear angle, a hair of that puck could be touching the line. Sensible people will all agree, and have agreed tonight, that when combining all available views and evidence, Gagne scored.

We don't doubt that the NHL officials in the war room saw the play differently, and we reject any idea that there's a conspiracy here. Those in the war room probably agreed it was a goal, but they didn't see conclusive video evidence.

When everybody knows it's a goal and the only thing standing between the right call and the wrong call is the rulebook, there's a problem in the rules. As stated, the rule makes sense to an extent, and you don't want to alter things so that you give officials too much gray area and force them into making a judgment call more than is necessary. There has to be some stipulation, however, that accounts for practicality. Officials have to be able to use their judgment when there's clear evidence a goal has been scored, even while there may not be conclusive video evidence.

You see the case above. Amidst one of the NHL's most vicious rivalries, there's consensus on this. Luckily, it didn't have an effect on the hockey game outside of a few momentum shifts, but that doesn't mean we have to ignore the fact that there's a problem here.