This feature seemed popular after the Penguins game, and while we'd love to promise that this will become a regular feature, we just can't promise that.  We'll try, we really will, but we just can't guarantee.

Especially on nights where there are a limited number of highlights on the NHL Video page - as there were tonight.  But there was really only one play worth breaking down: the game-winner in overtime.  Unfortunately, the video doesn't begin with Briere catching iron.  Instead, it begins with Hartnell and Briere skating off the ice at the bench.

So here's the video:

Really, that's a tough result.  A breakout pass caught the Flyers in a line change, which was really the beginning of the trouble.  We pick up the video here: 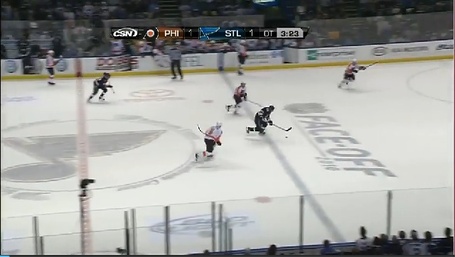 We notice Sean O`Donnell already beat, which isn't good.  Claude Giroux is the one right at the blueline, fresh off the bench and already behind the play.  Not sure who he came on for (I assume that's Scott Hartnell at the top of the screen, in the Flyers zone), but again, the Flyers were caught in a change.  Even Kimmo Timonen is just coming off the bench.  In fact, the official scorer said both Giroux and Timonen began this shift with 3:23 left in overtime.  Notice the clock?  3:23 left in overtime.  O`Donnell, meanwhile, began his shift 17 seconds earlier. 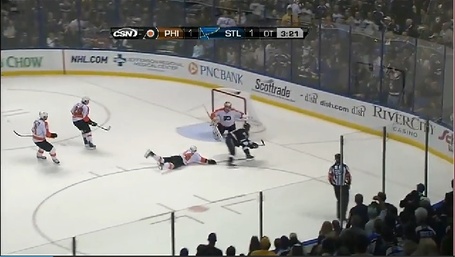 Here we see Timonen lay out in an attempt to block the shot.  He didn't, but he did force the play wide, and you can say he successfully forced the missed shot.  At this point, the Flyers averted danger and are in a great position to escape damage from a terrible change.  Obviously, they find themselves in more trouble. 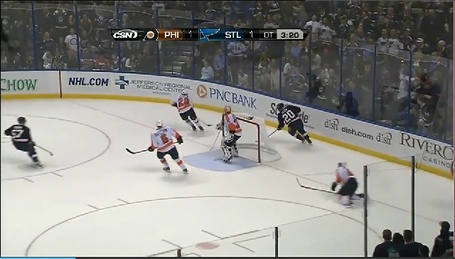 Right at this moment, the puck is on Claude Giroux's stick.  Now, I don't know what is being communicated on the ice, but right here, Giroux needs to turn and go up the boards.  If he's unaware of pressure coming - specifically, how close #57 is - Boucher and O`Donnell need to be shouting "TIME! TIME! TIME!"  Maybe they did, I don't know.  Giroux certainly didn't keep the puck on his stick long, one-timing the puck back towards Timonen.  We all know Giroux is better than this.  Unfortunately, this is the turnover that allows the Blues to create the goal. 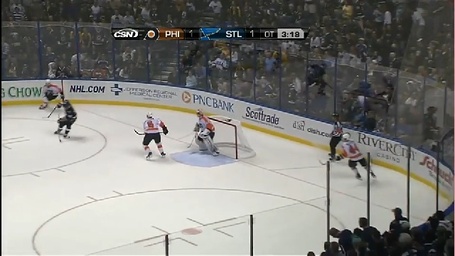 Giroux's backhand goes straight to #20, who immediately wheels out into the slot.  At this point, he is the immediate threat.  You may notice, not much is happening in this frame.  There is only one Blue, and he has the puck.  But this frame is important because... the fourth Flyer has still not introduced himself into the play.  That fourth Flyer is James van Riemsdyk.  The official scorer says his shift started at the same time as Timonen and Giroux, but if we go back to the first image, we know that he didn't even have his first leg over the bench by the time Timonen and Giroux were 10 to 15 feet away from the boards. Also, it is in this instant that the goal scorer steps on the ice. 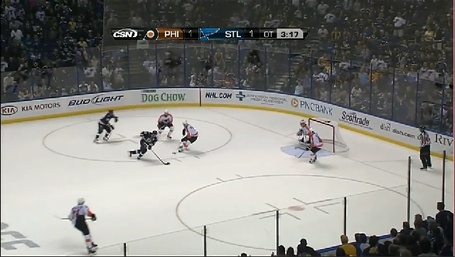 Here we see van Riemsdyk.  Honestly, I wish I could see how it is that he got to where he is, turning away from the boards back towards the play.  What drew him to the other side of the faceoff dot?  I really, really hope he saw Giroux try to backhand behind the net and went for the breakout.  It makes sense, but we can't be certain.  As it stands, it just looks like he's completely out of position for no reason.  I don't believe that, but without a behind-the-net cam, we can't be sure.

Anyway, O`Donnell did a good job to not take himself out of the play, instead following the puck-carrier to the slot.  No, he's not in great position, but he's still a factor in the play.  Also, Timonen is back in position. 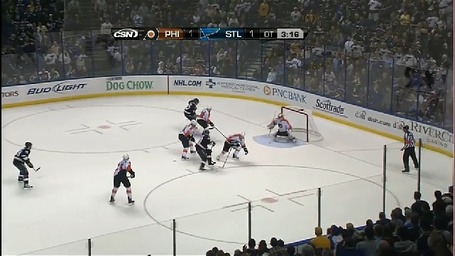 This is where you want van Riemsdyk to have already picked up the trailer.  At this point, Timonen had just blocked the shot, and Boucher is down in the butterfly.  There really isn't much to say except that this frame tends to implicate van Riemsdyk, though I really want to know why he was so close to the near boards to begin with.  The goal scorer - Carlo Colaiacovo - had just jumped on the ice 3 seconds earlier, so he did a great job of getting into a position to score. 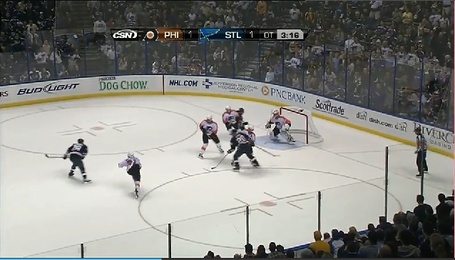 As he winds up to shoot, Boucher is still getting into position, while trying to see around O`Donnell.  Not a good situation to be in.  You also see van Riemsdyk lunge for the puck unsuccessfully.

This was a tough play, that has a lot of unanswered questions.  How did the Flyers get caught on a change?  Did Briere and Hartnell get stuck, or did they glide back to the bench?  Did O`Donnell not know Steen was behind him?  Why did Giroux immediately fire the puck blindly behind the net?  Why was van Riemsdyk so far away from the slot?  Did nobody tell JVR that the Blues had a player flying through the neutral zone?

The easy answer is that this goal was all JVR's fault.  The cliche answer is that the Flyers had a close call at one end, and the other team came down and scored.  The real answer is probably that O`Donnell got caught napping, Giroux rushed his decision, and van Riemsdyk got caught anticipating and not aware.

Or you can just say the Flyers got unlucky, having Timonen block a shot that bounced straight to the Blues for a one-timer.