Last week it was reported that the NHL would be joining forces with the man behind The House of Ideas, Marvel Comics' own, Stan Lee, creator of countless Marvel comics superheroes. The partnership will yield the creation of 30 new superheroes - one for each NHL squad - that will presumably reflect the ideals, characteristics and personality of their respective teams.

With all due respect to Mr. Lee - and believe me, I have no shortage of respect for the creator of your friendly neighborhood Spiderman - I assume that he knows very little of the Philadelphia Flyers, the heroes clad in orange and black.

To whit, I decided to take action. Who better to take the first stab at designing our very own superhero than yours truly? Okay, besides anyone who currently works in comics and actually likes the Flyers.

Besides them, nobody... that I know of.

After the jump I give you my take on (duh da duh daaaa) The Broad Street Bully. (Yes, it's on the nose but there's no better name for a Philly hockey hero.) 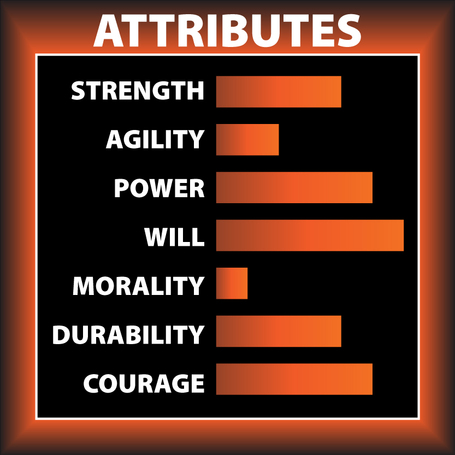 Parents: Ray and Bernice "Bernie" Snider, French Canadian immigrants who both worked blue-collar jobs in order to support their son. Their work ethic inspired Bobby to never give up and to always do his best, two traits that shaped his heroic adult life.

Special Powers: Kinetic Energy Conversion - When hit, the Bully is able to absorb all kinetic energy of that object or human that hit him, and turn that energy around on his attacker. To hit the Bully is to only make him stronger. The more physical contact that is made, the more force will be redirected into his opponent. This basically makes him unstoppable in the face of a bruiser or tank-type opponent. It takes a tremendous force to knock around the Bully.

Secondary Powers: Focused Rage - In the unlikely event that The Broad Street Bully actually gets knocked down, or when he has absorbed the maximum amount of kinetic energy, the Bully goes into a rampage like state that, instead of skewing his attacks, focuses them. A rampage ensues and anyone in his path is in certain trouble.

Origin Story: From the day that they brought him into the world, Betsy and Bernie Snider knew their son was special. His powers first manifested themselves in high school, in 1973. One day Bobby found himself the subject of an attack, perpetrated by a couple of large classmates that had moved to town from Buffalo, NY. Their bullying on the last day of sophomore year sent him into a rage. Focusing only on the injustice he had been served, that summer, Bobby worked out, gaining strength, and muscle, in order to better deal with his Buffalo rivals. Assisted by a growth spurt, Bobby grew into a very intimidating figure, himself.

The next year Snider found himself being able to push around all of his classmates. While many saw him as a villain he simply was righting the wrong of the previous year. Soon Bobby rose to the top of the school's food chain. For the next two years he stayed there.

After high school, Snider's reputation as a bully preceded him no matter where he went. Deciding to put his stigma to good use, Snyder began fighting the good fight. Naming himself after the very ruffians who started his journey, Bobby charged himself with the task of upholding justice and took the moniker, The Broad Street Bully.

He began to turn his life around by sticking up for the little guy and making sure that hard work and determination were rewarded. His resolve, though often tested, never waivers as he goes into battles day in and day out.

Arch Enemy: Sidney Bettman A.K.A. The Coward - A weak-willed individual, though he doesn't look it, Bettman is a formidable opponent for the Broad Street Bully. Born into a rich family, Bettman always had things handed to him on a silver platter. This turned Sidney into a spoiled brat and a whiny child. Butlers, maids, friends and even his parents would fawn over him and answer to his every whim. Little did they know, they had no control.  The Coward's powers include a telepathic ability to inform the decisions and actions of those with weak wills and minds. Often amassing an army of lemming minions, Bettman is able to offset his lack of physical prowess with his legions of sycophants and henchmen.

Sidekick: Pelle Parent: Pelle Parent's superhuman reflexes and hand-eye coordination made him basically nigh-impervious to offensive attacks. His potential was unparalleled and the combination of his agility and grace combined with the brute force and power of The Bully to create a wholly unbeatable team. Tragically the life of Pelle was cut short as his rapid reflexes could not save him against two tons of steel. While pushing aside a young mother and her child, Parent was struck by a speeding drunk driver.

Notable Team-ups: While the death of his one and only sidekick still weighs heavily upon the shoulders of the Bully, he has formed partnerships with other heroes over the years.

During the Cosmic Cup War, The Broad Street Bully found himself fighting side by side with numerous young heroes, most notably, the mustachioed maniac, known only as Hex. Known for his brazen fighting prowess and wonderful facial hair, Hex tore through opponents in berserker rages. 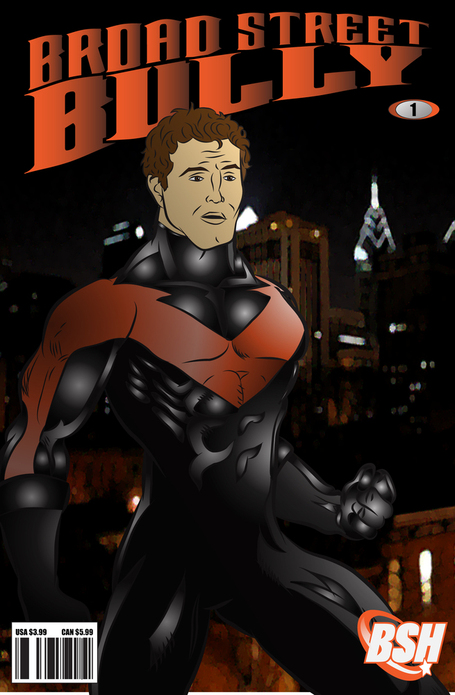 The war was not fought without casualties. While battling some evil henchmen, the Guffaw Kid unwittingly turned his back on his most feared opponent, Montreal Murderer. Staying true to his name and his known cowardice, the Murderer snuck up behind the Guffaw Kid and stabbed him in the back. The Guffaw Kid's death was avenged by Hex in a rage that displayed his true potential and power. Though the heroes did not return the Cosmic Cup to it's home, they lived survived to fight on another day.

Other Bullies: In recent history, while the evil Commish froze time and trapped a couple dozen of the world's strongest heroes, rendering them useless, new heroes were charged with taking up the mantles of their idols.  A young man from the heart of Ontario was called upon to fill the shoes of the Broad Street Bully. Embodying the spirit of the Bully, Claude Richards also brought a new level of mobility that Bobby Snider lacked. While he was smaller and not as intimidating, Richards still fought with unabashed determination and an edge, he is also quick, agile and has more skill than his predecessor.

After being released from the time trap by a union of other superheroes, Bobby Snider realized that the new Bully was what the world of today needed. He gracefully stepped aside, only to take up the fight from time to time when Richards was in need of help. The second Bully's costume came under much controversy from the fans. Many of them felt that the suit lacked the trademark orange in the original Bully's costume. After only a few issues the costume was changed.