I was going to just post this in the comments after Don ("DLJr") sent out a call for a video breakdown, but realized how long it was.  Plus, nobody wants to see five images in the comments, since that would take forever to load.

So with that, let's make it a full post.  You all remember the Penguins first goal: lost faceoff, Sergei Bobrovsky has a skate malfunction, and Tyler Kennedy roofs it past an out-of-position and struggling to recover goalie.  In case you don't remember, here's the video:

Jump for the breakdown:

Alright, here we go.  We're going to break this down into 5 still images, unfortunately with no fancy writing on them. 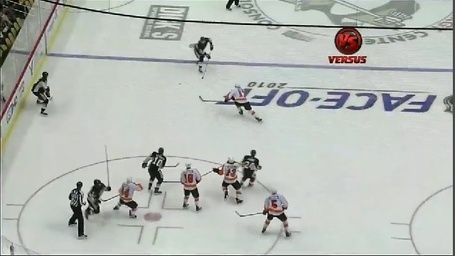 Already not a good start with Mike Richards losing the faceoff - do you want the best faceoff man (Jeff Carter) taking it, or the best defensive center (Richards) in position to defend? - and Dan Carcillo unable to get to the point, but at this point, it's manageable.  Obviously, the puck is going to the guy along the boards, as he's wide open.  Next. 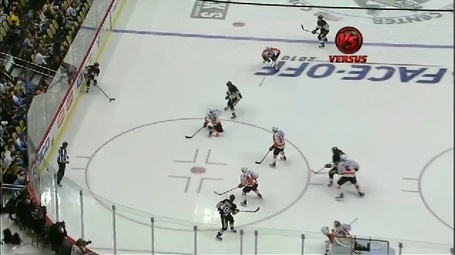 Carcillo falls down.  Greaaaaat.  Richards is in proper position, but nobody is there for him to cover.  At this point, everybody is still managing the problem, except Carcillo, who is exacerbating it.  Braydon Coburn is doing exactly what he should be, but you can already tell that Tyler Kennedy is going to be wide open in about 0.5 seconds, since Kimmo Timonen doesn't know where he is. 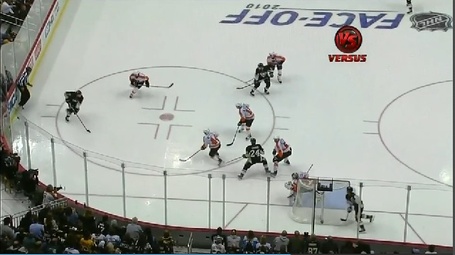 And here's where it all goes horribly wrong.  Count the men who are facing the puck carrier.  Four.  Four of them.  The only guy not watching the puck (Coburn) now realizes that Kimmo came off his man, but doesn't know where he went.  Hint: He scores the goal. 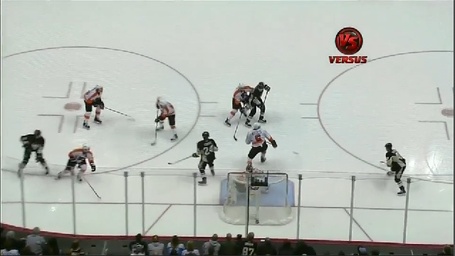 Kimmo moves up to cover Carcillo's guy, except he didn't really step up.  He just waited for him, allowing him to see the play.  And Kennedy wide open across the crease.  Richards - who was in the appropriate position - is unable to take away the cross-ice pass, which makes you wonder what exactly he was doing.  Carter did a good job following his man in from the point, but it doesn't matter.  Coburn leaves Cooke (his man) to follow the puck to across the crease (it's now in between the edge of the crease and the hash marks) to the "Where'd he come from?!?" goal scorer.  Lastly, Bob has already fallen down. 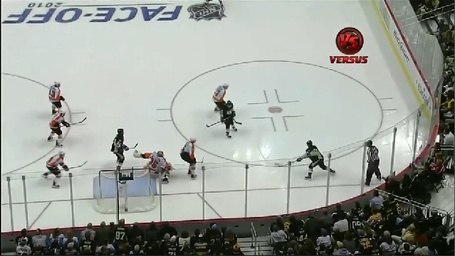 And here we see the shot.  Coburn tries to block the shot, but it isn't clear he knew Bobrovsky had fallen down.  Either way, he's not in the shooting lane, so at best he's doing a poor job of blocking a pass.  Really, this is the worst thing Coburn did on the play, so he can get a pass.  Bobrovsky is so far out of position because he slid forward trying to regain his balance.

So you have: 1) Richards losing a faceoff; 2) Carcillo failing to get to the point; 3) Carcillo falling down; 4) Nobody picking up Kennedy; 5) Timonen not attacking the puck carrier; 6) Richards not blocking the cross-crease pass; and 7) Bobrovsky falling down.

This goal could have been prevented if any of the seven things had not happened.  As far as the team losing Kennedy behind the net, that can obviously be blamed on Carcillo for taking himself out of the play, but Timonen needs to let Coburn know he's letting his man go.  Then Coburn needs to tell Richards to cover Cooke.  As a result, the end of the play was a wide open Kennedy and Mike Richards standing around, not covering anybody.