The Spectrum begins to crumble: A sad day in South Philly

Share All sharing options for: The Spectrum begins to crumble: A sad day in South Philly

PHILADELPHIA -- It's kind of weird. If you go down to the corner of Broad and Pattison in South Philadelphia right now, the Spectrum is still standing. In fact, if you're standing on the Pattison Avenue side of the building and you ignore the chain link fence and the lack of landscaping, it looks like the Flyers could play inside tonight.

Then, when you walk around to the other side of the building -- the side that faces the "Wells, um... Fargo... whatever Center" as Ed Snider so aptly put it this afternoon -- it looks a lot like 1967 when the wind blew a hole in the roof of the Spectrum, forcing the Flyers to play most of their inaugural season on the road in Quebec City. It's just on the side this time. 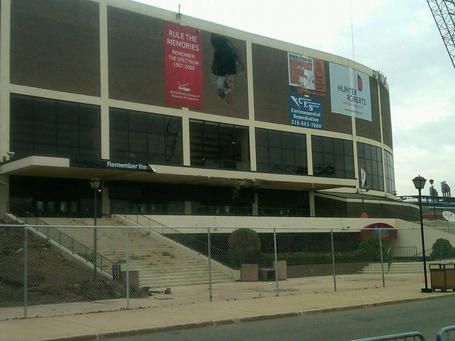 So just patch that thing up and we'll be ready to play hockey again, right?

Sadly, that won't be the case. After today, the demolition crew will continue to slowly take the Spectrum down piece by piece. There will be no implosion like we saw with Veterans Stadium seven years ago. It will be a slow process. Within a few months, though, the Spectrum will be completely gone and Philly Live! will be on its way. Peter Luukko has said that they plan on having Philly Live! ready for the start of baseball in 2012, so construction will be here before we know it. Progress or something.

Today was about remembering, though. Dr. J and Bernie Parent and Bobby Clarke and Snider all talked about their memories before the wrecking ball made its first strike. When it was time for the orange ball to smack the side of the building for the first time, it was a bit anti-climactic. It didn't even do any damage and it took several strikes before a brick even fell.

After about 10 or 15 minutes, they smashed out some windows for effect and there was a sizable hole in the brick, but the jokes were already flowing.

"Use Pronger's elbows instead! We're gonna be here til June! Jesus, even Crosby hits harder than this! Must be this guy's first day on the job!"

You get the point. Today wasn't really about the actual demolition of the Spectrum, at least in my eyes. It was more of a chance to officially say goodbye, like visiting an old friend on their death bed. It's not quick like a Band-Aid.

I didn't cry or even feel really all that sad today, probably because I know when I head down to the Sports Complex on Friday for the Flyers game, the Spectrum will still be there in some form. It's not until the building is actually completely gone that it'll hit me, and I think a lot of the people down there today had the same feeling.

We'll have video of the entire demolition as soon as YouTube decides to cooperate.