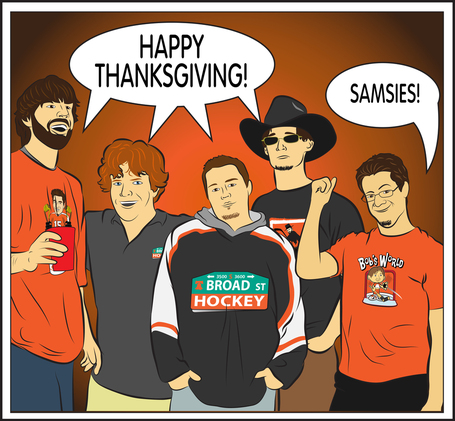 Hello, everyone! This week I am taking a vacation from Slap Schtick. However, I did, in the spirit of this wonderful, if not gluttonous, holiday, prepare a small list of things I am thankful for. Find out what they are after the jump.

In no particular order, I am thankful...

In all seriousness, I am hugely, immensely and eternally grateful for this blog and it's community.  In less than a year I've found a bunch of new friends and wonderful opportunities at my fingertips all because of this little website. It's a truly awesome thing we're all a part of here. Thank you to anyone who comments, fanshots, fanposts or even lurks. Thank you to Ben, Geoff, Teemu and Travis for all the awesome content posted on a daily basis. Special thanks to Travis for being such a good sport.

All the best to you and yours. Stay safe, stay classy and stay the hell out of Marty Brodeur's way in the buffet line. Go Flyers!