It's been awhile - first week of October? - since I last did a breakdown post, but playing around with the NHL's video player got me motivated to do another one. Add in a day full of studying and I'm doing some serious procrastinating (I'm actually watching the Eagles...)

So before we get to the Bruins first goal, watch a sequence from about thirty seconds prior, paying close attention to how the Bruins enter the Flyers' zone:

Now, surprisingly, the Bruins will use that exact same play to gain access across the Flyers blueline on the very next shift.  Jump for video and analysis.

So here's the goal again:

Anybody see the problem already? Well, there were many, but to start, Boston used the exact same move to gain entry into the zone. 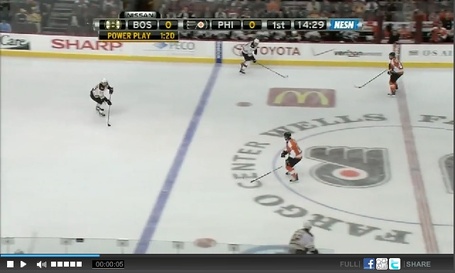 The puck carrier is Patrice Bergeron while David Krejci is at the bottom of the screen while Milan Lucic is at the top of the screen. Currently, Zdeno Chara is out of the screen, behind the play. Nathan Horton is skating across the Flyers blueline towards the near boards.

If you followed the previous video, you'll realize that the Bruins will have Krejci cut behind Giroux while taking the pass from Bergeron just as he crosses the Flyers blueline. 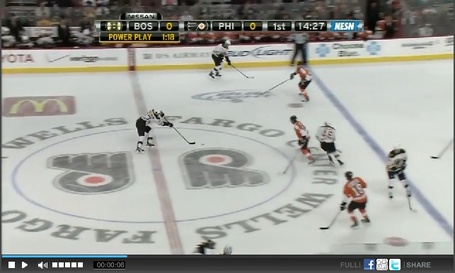 Here we see the pass, which could immediately set up a two-on-one (Krejci and Horton against O`Donnell) if executed properly. Not sure if this is a great power-play by Boston or a terrible penalty kill by the Flyers, but this shot right here should be trouble. 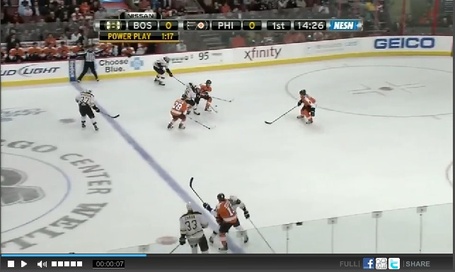 It didn't quite work out as a two-on-one as Horton got tangled with Richards and Meszaros was able to intercept Krejci as he entered the zone. Something you should notice at this point, Claude Giroux was rendered essentially useless on this play as he was unable to defend the zone, the pass, or the puck carrier. He was Hal Gill'd.

This screen shot tends to suggest the Bruins have a good power play, as they had the possibility for a two-on-one, which failed. But their consolation is either a streaking Milan Lucic going one-on-one with a flat-footed Sean O`Donnell or usually having Nathan Horton entering the zone with a full-head of steam as well. 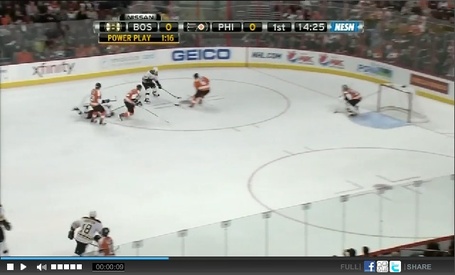 Giroux slows up while Meszaros is hustling back into position. O`Donnell is getting turned inside out - really, not a good game by him last night - and Mike Richards is... stumbling back on defense.

What you should be upset about is the Flyers currently have a 3-on-1 advantage, with Krejci out of the play. And yet we know Boston will score on this play. 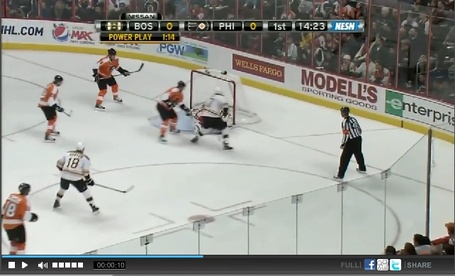 For anybody who played hockey, what's the one (well, two) thing(s) you're taught NEVER to do in the defensive zone? If you said watch the puck, we had similar coaches. Although I also would have accepted "stop moving your feet". Here, all four Flyers penalty killers are guilty of watching the puck AND gliding around aimlessly.

At this point, they STILL have a man-advantage with three players defending two players. Yes, Horton is wide open, but Giroux might be able to get there should the puck squirt out that way. Surely you can see some of what we can conclude from this play as far as where blame needs to be spread, but we're almost done. 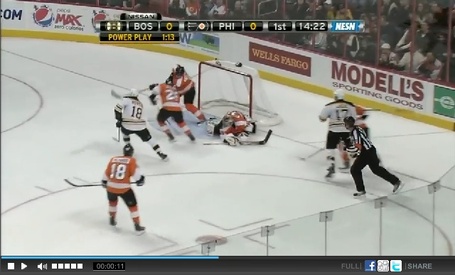 So Giroux and O`Donnell fight to defend their crease - which I guess is good - while Meszaros takes Lucic out of the play. Richards, meanwhile, has at least two Bruins behind him. Who could be anywhere, since Richards is not playing defense.

Perhaps none of this happens if O`Donnell makes a smarter play. Maybe he throws it into the corner (hindsight being 20/20, of course), gets some air under the puck, or banks it off the glass. Instead, he fires a slap pass right through the slot. 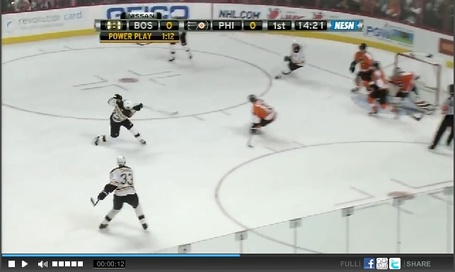 Directly to the stick of Patrice Bergeron. If you want some good news, look at the time stamps and look at Sergei Bobrovsky. In one second he went from laying on his stomach to a 3/4 stance, pushing off to get back into position. And he almost did. Truly remarkable.

But that's not why we're here.

First, give credit where it's due: The Bruins have an effective way of getting through the neutral zone and crossing the blue line. Before the puck is even in the Flyers zone, Claude Giroux is effectively taken out of the play. From there, the Bruins give themselves many options.  It's a well-executed play. But it's also defensible.

For starters, Giroux could have easily kept his stick in the passing lane. Instead, the puck gets behind him and the Bruins enter the zone.

Second, Meszaros could have made the smart play rather than go for the big hit on Krejci. This one is minor, since he took Krejci out of the play, but he let Lucic come streaking through the zone.

Third, O`Donnell... well, he just got embarrassed. There isn't much else to say. But then he followed it up with a hurried clearing attempt, which was ill advised. Just an all around poor shift from O`Donnell.

Fourth, and perhaps most frustrating is Mike Richards. It's one thing to get tangled up with Horton as he crossed the blue line, it's another to take the rest of the shift off. Horton immediately gets separation and glides to the slot while Richards just glides to nowhere.

Not only do you expect more from Richards, this sort of play is unacceptable for anybody. Not only was he lazy, but he was irresponsibly lazy. Watching the play the entire way, being unaware of the location of at least two Bruins, and being out of position on the penalty kill is just not good enough.

If one was to assign blame - again, giving credit to the Bruins for a great play - it has to start with O`Donnell, move to Richards, then to Giroux.