2010 was a year of spectacular hockey moments in Philadelphia, but is it possible to single out just one of these moments and pick the BEST Moment of the year?

We're sure as hell going to try. The nominees, after the jump. Note that we tried to keep particular goals out of the mix here, since we already voted on Goal of the Year. 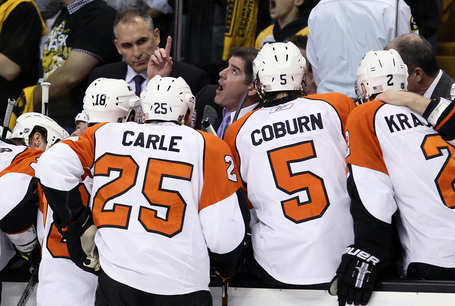 "The Timeout:" Peter Laviolette calls timeout in Game 7 vs Boston

It was, without a doubt, the best use of a timeout in the history of the Flyers, perhaps in the history of hockey. With Boston sprinting to a 3-0 first period lead in Game 7 of the 2010 Eastern Conference Semifinals, Peter Laviolette gathered his troops around, reminding them that a hockey game is (cliche time!) a marathon, not a sprint. He urged them to just break through, get one goal, and the game would turn.

James van Riemsdyk would score shortly thereafter, and the Flyers would add on three more goals afterward. Boston didn't score again that season, as the Flyers went on to win the game 4-3, completing the best comeback in modern sports history. 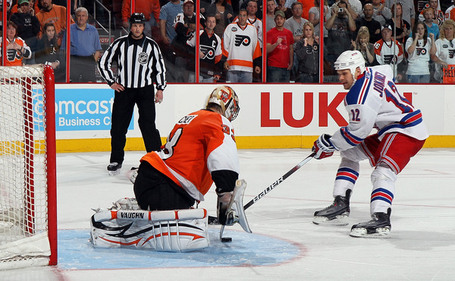 Brian Boucher's Final, Playoff-Clinching Save vs Rangers in Game 82

After all the chaos that played out over the course of 82 Flyers games in 2009-10, none of it mattered when Olli Jokinen stepped to center ice on April 11. Jokinen needed to score to keep the Rangers season alive, while Brian Boucher just needed to make one save to send the Flyers to the playoffs, giving them the clean slate they so desperately needed. You know what happened next: Boucher made the save, the Flyers went to the playoffs.

Ian Laperriere's Standing Ovation on May 5

Ian Laperriere wasn't in the game on May 5 after getting hit in the face while blocking a shot in Game 5 against the New Jersey Devils a week prior. In the Flyers' first game back at Wachovia Center after that, though, the fans made sure Lappy understood their appreciation. No. 14 was saluted on the video board during a TV timeout in Game 3 against Boston, and afterward, the standing ovation brought Laperriere to tears. 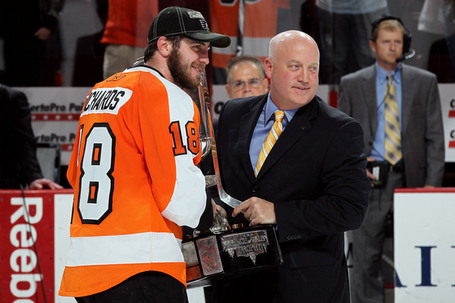 It's an ages-old superstition in hockey, or really, in all sports. When your ultimate goal is the big trophy at the end of the year, you don't settle for anything else. You don't settle for a measly conference championship trophy. When presented with such a trophy, you shun it, ignore it, etc. It doesn't exist. It doesn't matter.

Mike Richards ignored all of that in 2010. After beating the Montreal Canadiens in Game 5 of the Eastern Conference Finals, NHL Deputy Commissioner Bill Daly presented Richards with the Prince of Wales Trophy. With a big middle-finger to superstition, Richards hoisted the Wales Trophy and strutted towards his smiling teammates, eventually finding his way back to the Flyers dressing room.

This was fantastic for two reasons: after everything the Flyers had been through over the course of the year, Richards knew that the team deserved at least a bit of a celebration. They weren't settling for the Eastern title, but it was certainly something worth recognizing, given where they came from. Secondly, look at Eric Lindros, the Flyers' captain the last time they won the Prince of Wales. He didn't accept it, the Flyers were swept out of the Cup Finals, and Lindros never won anything again.

Prior to a game on December 4th, the Flyers honored a fallen Navy Seal, Staff Sgt. Collin Thomas, by presenting his parents with a personalized team jersey. Mike Richards was on the ice for the presentation, but in a spur of the moment decision led by Chris Pronger, the entire Flyers bench got up, skated across the ice to the Zamboni tunnel, and shook the hands of Thomas' parents. Truly a fantastic moment.