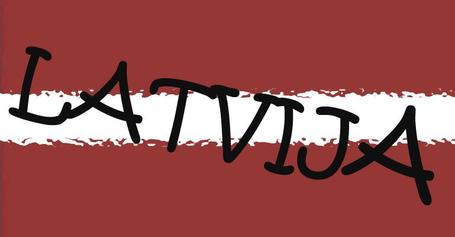 As you may know, the fine folks here at Broad Street Hockey prudently decided to jump on the Team Latvija bandwagon early, supporting and following their efforts throughout their 2010 Olympic Campaign.  With half of their NHL talent coming from the Flyers roster, it's the only allegiance that really makes sense for fans of the Orange and Black.

Here's everything you need to know about Latvia, their team, and their chances of getting on that enormous team-sized podium.

About Latvia: Latvia is one of the three small, former Soviet states on the Baltic Sea, which are conveniently stacked North-South in alphabetical order (Estonia, Latvia, Lithuania).  Only 2.2 million people live in Latvia, roughly the same number as lived in the Greater Philadelphia metro area at some point.  Latvia has roughly the same area as the eastern half of Pennsylvania.

Non-Hockey Latvian Sporting Exploits: For a northern country known for its long, bleak winters, it's surprising to note that Latvia has had far more success at the Summer Olympic Games than at winter events.  Latvians have won a very respectable seventeen medals at summer games, including golds in gymnastics in 2000 (Men's Floor Exercises), and in Men's BMX Cycling in 2008, making Latvia the only country to ever win gold in that event.  The only medal Latvia has ever registered at the Winter Games was a bronze in Torino in 2006, in Men's Luge.

While generally considered about a twentieth-percentile country in European soccer, Latvia put up a real respectable showing in World Cup qualifying this year, going 5-3-2 and finishing third in their group of six.  The Latvians were impressively 3-2 on the road, showing an ability as a people to excel far from home that will certainly serve them well in British Columbia.

Hockey in Latvia: It's an understatement to say that Latvians love their hockey.  The only other country where hockey is as nearly as unparalleled in popularity as Latvia is Canada, a factor which should prove interesting should those two nations meet in the gold medal game as I expect them to.

When there aren't international competitions to attend to, the Latvian players and their fans are all about Dinamo Riga, the KHL team which is almost entirely made up of Latvians.  That lack of diversity makes Dinamo Riga and the Latvian National Team extremely similar, with many of the lines used in the KHL expected to be identical to the ones used in Vancouver.  That continuity means that chemistry and familiarity are already established among the team, in a way no other team (except Belarus) can boast.

Goaltending: The top Latvian goaltender, Sergejs Naumovs is old.  Despite the fact that he will turn 41 in April, Naumovs is still the backstop on which Latvian gold medal hopes rest.  He was retired, but waffled and came back for these Olympics, making him the Bretts Favres of Latvian hockey.  Naumovs is very possibly related to Marie N (Marija Naumova), who won the Eurovision Song Contest  for Latvia in 2002.  Her performance was, in my most expert Eurovision opinion, the worst winning song of the decade.  But the country totally redeemed itself in 2008, when it sent this pirate anthem as it's entry:

(If you would like the mp3 of this masterpiece to become the focal point of your next workout mix, or for some seedier purpose, shoot me an email and I'll send it your way).

So in conclusion, Team Latvija's goalie is a surly old pirate.  Where so-called "olympic-caliber" goalies like Martin Brodeur and Miikka Kiprusoff use a harmless leather catching mitt, Naumovs undoubtedly wields a savage metal hook.  I dare you to screen him on Tuesday night, Ovechkin.  I dare you.

Defensemen: The two NHL players on Team Latvija will both be manning the blueline. Kārlis Skrastiņš of the Dallas Stars is the more veteran of the two.  These are his third Olympic games, having previously worn the dark red and white in Salt Lake City and Torino.  Skrastiņš first arrived in the NHL in the 1998-1999 season, so he knows his way around the NHL-sized rinks ice pretty well by now. 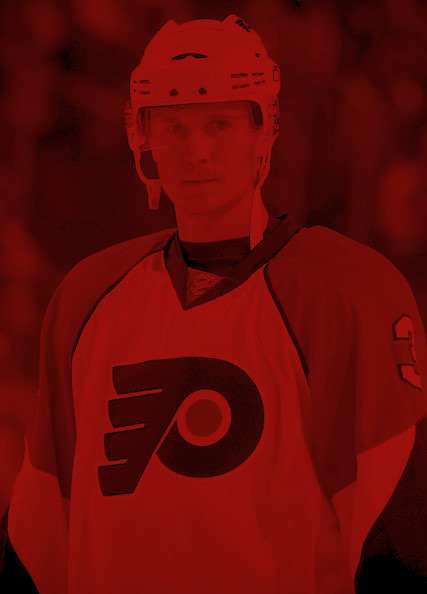 The other NHLer playing for Latvia is, of course, our very own Flyers superstar Oskars Bārtulis (shown at right in Latvian Dark Red).  Bārtulis is from the town of Ogre, which is fitting since he's as money as Shrek is at the box office.  It's Bārtulis' first time on the Latvian Olympic team, meaning that Latvia is, to date, undefeated at the Olympics with him in the lineup.

Bārtulis registered an assist  against the Jaroslav Halak-led Habs on Saturday.  If Latvian defensemen can get on the scoresheet against the Slovak goalie, just imagine how well their forwards will do!

Forwards: I'm sure they're awesome, but I don't know a whole lot about the players who will be doing the primary scoring for the Latvians.  Kaspars Daugaviņš and Mārtiņš Karsums are both currently AHLers, so they should be banked on for a solid eight or so goals each during the tournament.  Aleksandrs Ņiživijs has the most goals for Dinamo Riga of any of the Latvian team members, but he earns that distinction with only six goals on the season.

Basically, Latvia is going to need to count on some secondary scoring from Skrastiņš and Bārtulis (and maybe even the occaisonal Hextallian empty netter from Naumovs) if they're going to go all the way.

Prediction: Latvia will stun the Russians early in the tournament by getting on the scoreboard, and will keep things vaguely competitive in the rest of group play against the Czechs and Slovaks.  Firmly under the radar, the Latvians will reel off consecutive shock wins against Finland, Sweden, Russia and Canada to win the country's first gold at the Winter Olympics.

Latvian Schedule: vs. Russia (Tuesday 11:55 pm EST); vs. Czech Republic (Friday 7:30 pm EST); vs. Slovakia (Saturday 7:30 pm EST); Playoff and Medal Rounds (February 23-28, TBA).  The first two Latvian games will be on CNBC, because everybody knows that the Latvians mean business.  The third will be on MSNBC, because by that point the hype surrounding this team will be as big as Keith Olbermann's head.