Since interviewing Flyers prospect Jacob De Serres in November, we admittedly haven't been keeping up on his progress as much as we should have been.

Recently, Ben received an e-mail pointing us toward a blog devoted to the Brandon Wheat Kings that I have recently subscribed to.  Hopefully this will lead to more information on De Serres in the future.

With this new resource and two posts specifically focusing on De Serres, it seems fitting to give an update on his progress.  It doesn't hurt that he's been on quite a tear lately.

So, with a sticktap to Carol Flood for the tip and Bruce Luebke for his web site - Luber's Lounge - jump to see the updates on De Serres.

Again, I wish to state that about 90% of this post was written solely on information from Luber's Lounge.  So, to ease my worries about claims of plagiarism, go look at Luber's Lounge for all of your Brandon news.

From Carol Flood came news of De Serres' new mask.  He has been using the mask since the beginning of the month, and it has an interesting twist. 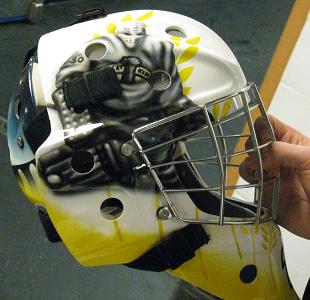 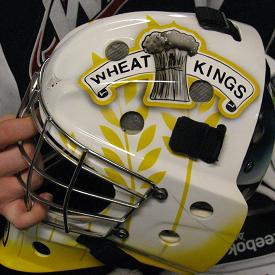 No doubt you don't recognize the goalie on the right side.  From Bruce's story, De Serres explained the images on the top of his mask:  "I just looked into Brandon’s history and I knew that Ron Hextall had played there and knew he had played with the Flyers as well. I found someone in Brandon that could do it and he liked the idea and I thought the vintage logo would go well with the vintage player."

Personally, I think that's pretty sweet.  Hextall has always been a fan favorite in Philly and who doesn't like throwback logos?

The back of his helmet also has a pretty cool image (maybe not as cool as Ray Emery's mask, or his new mask though): 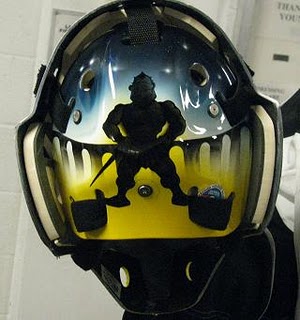 Again from Bruce's story, "I love the movie gladiator. In that movie, he just fights ‘til death without any fear and I think that’s kind of the motto you have to have as a goalie or in life," says De Serres, "It just reminds me to be a warrior, a gladiator."

Maybe a little cliche, but whatever.  Plus, the feet look a little bit like a jester.  Either way, cool mask.

Now, away from the aesthetics of De Serres, you may remember that he was traded at the beginning of the season after a rough year in Seattle.  When we interviewed him back in early November, he spoke of a necessary change of scenery.

"I needed a fresh start and Brandon's a lot better, he said. "Good guys, a lot of positive players, and a good atmosphere to be around. I'm happy with it here and couldn't have asked for more."

From Bruce's story, De Serres was slowed down in late December and early January after injuring a finger on his blocker hand in a car accident.  He feels a lot better now though, even saying that he is comfortable and confident in net.

Thanks again to Carol Flood for the tip and to Bruce Luebke for his work at Luber's Lounge.