The Broad Street Hockey Fan Confidence Rating is a measurement of how confident fans are in the current direction of the organization as a whole. Voters take into account the team's on-ice performance, management and coaching decisions, and the overall status of prospects and the farm system.

If there's one thing we've learned in our fan confidence polling this season, it's that there's a direct correlation between the Flyers winning hockey games and confidence going up, going down, or holding steady. Of course, that's a pretty damn obvious statement and by saying it I feel a little like John Madden calling a football game. But I say it because it's a little deeper than the seemingly obvious statement is on the surface.

You see, this polling is based on, as mentioned above, the on-ice performance of the club, the farm system, management, etc. It's not just the on-ice performance that sways fan confidence. With this Flyers club, however, the management has thrown all of its eggs into one basket. If that's not clear by the moves Paul Holmgren has made over the last year, then nothing is clear.

With that being so, having a dearth of prospects at the AHL level doesn't sway our confidence as much as a winning or a losing streak does. Neither does a terrible move or two by our general manager. No, because we've been convinced that -- for better or worse --  this team is built to win this season, we're most swayed by how the Flyers are playing right now. In other cities where a Cup isn't expected, a few losses by the NHL club might not be a huge detriment to the confidence of fans like it is here. In Philadelphia, especially with this team right now, it's different.

It's not surprising then, that as the Flyers have held steady in the standings, our confidence has held steady, rising just two points from our last poll. It's now at 70.8 percent, up from 68.8 percent last time. 339 people responded to the poll, which is completely unscientific but a pretty solid barometer nonetheless.

After the jump, take a look at the graph of the results over the course of the season and let us know how you voted. 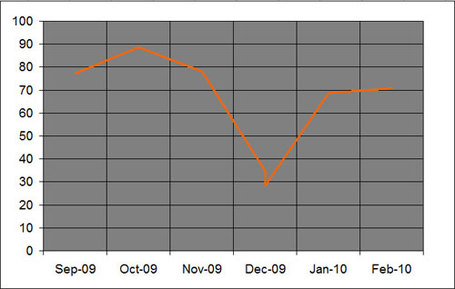