An Interview With Adam Morrison

Share All sharing options for: An Interview With Adam Morrison

There's a famous basketball player who goes by the name of Adam Morrison. In three seasons at Gonzaga University, Morrison was the nation's leading scorer, an All-American and runner up as National Player of the Year. Skipping his senior season to go pro, he arrived in the NBA at the start of the 2006/07 season and hasn't been nearly as impressive, shuffling between two teams and not putting up the points that earned him such high collegiate accolades.

A different Adam Morrison is hoping to have a better fate, albeit in a unique position in a completely different sport. The 6 foot, 3 inch tall Flyers goaltending prospect turns 19 on February 9 and is currently in his second season of junior hockey with the Saskatoon Blades of the Western Hockey League.

Like every prospect, it's clear that the soft-spoken net minder from Surrey, British Columbia wants to be a professional some day. But he seems to respect the cycle of the sport, acknowledging in an interview Thursday that 'you'll only find one or two [NHL goalies] who came right out of junior' to have success in the best league in the world.

In addition to not taking risks with his future professional career by skipping steps along the way, the differences don't stop there between the two Morrison's. The basketball version has an absolutely terrible mustache that the hockey version could never even try to rival.

"I don't have very much facial hair," hockey Adam told us. "I look more like a 14 year old who's parents are too mean to tell him to shave in high school."

With a strong understanding that the business side of hockey needs to be taken in stride, a lot of hard work and solid genetics when it comes to a beard on his side, hockey Adam Morrison hopes to have a much more successful career than his basketball counterpart when he does finally make it to the professional ranks.

For now, we caught up with him in the middle of his WHL season. His Blades, who currently sit in third place in a tough Eastern Conference, are going through a bit of a slump right now as they've gone 2-5 in their last seven games.

We spoke at length with Morrison on Thursday about the Blades, his experiences last summer at rookie camp in Voorhees, and the expectations he has for himself as his career moves forward. See the full interview after the jump.

BSH: You were a backup last season and you've had a greater opportunity to play this year. You're splitting time with Steve Stanford, what's your relationship like with him?

MORRISON: It's been good. He pushes me and I push him to be better every single day. We get along very well together off the ice but when it comes to playing on the ice, we know what we have to do and we've both done an extremely good job this year.

I think moving forward we have the best goaltending tandem in the league. The potential we both have is tremendous so going in to the playoffs that's where you want to be. You're only going to go as far as your goaltender takes you and both of us are very capable and have the confidence to take our team as deeply as we can.

Morrison, right, sits down for a meal with fellow goaltender Braden Holtby during the 08/09 season.

You guys are currently in third place in the Eastern Conference. Do you think you can win a Memorial Cup?

With the amount of character we have in our room, I believe we have the team to push for one. Yes, I believe we can win. It starts with our defense. We're a team that's built from the net out. We're not a flashy, high-scoring team but all year we've found a way to come out on top and get the job done when it counts.

We're going through a bit of a tough skid right now but every team on their way to a championship is always going to go through some controversy or adversity. We're not turning on each other and we just have to stick together and grind these last 20 games out, finish on top of our division and our conference and go into the playoffs with home ice advantage.

Let's get to talking about you a little bit. You were draft this past summer in Montreal in the third round, 81st overall. What's the first thing that ran through your mind when you were selected?

Just couldn't believe it. It was such a great honor to be selected by a team with such great history and such a great city. It was almost surreal because I knew it was going to be a tough journey just to try and be drafted last year because I didn't play a whole lot of games. But I knew I had given everything I had and shown everything I could show to the scouts when I was in the net.

I was playing behind one of the best goalies in the league so I knew my playing time was going to be limited, but I came to work every single day and kept up a positive attitude and helped the team whenever I could. I think all those little things helped out in the end and played a part in me getting drafted. It was, like I said, a huge honor and something I'll never forget. 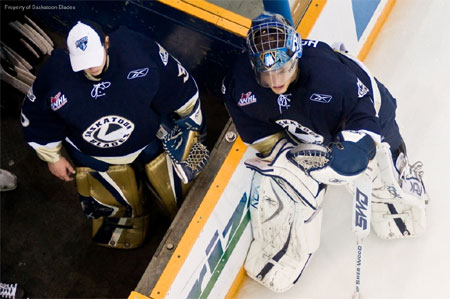 Morrison didn't see a lot of action in 07/08, but he learned the ropes from Holtby.

Also this summer, you attended Flyers rookie camp for the first time. What was your experience like there?

It was a lot of fun, you know. You get to see some of the AHL guys and then in September you got to see and meet the actual team. That was a lot of fun. For me, there wasn't a lot of pressure on me because it was my first camp. I just came in with an open mind, ready to learn whatever I could learn and just soak up whatever experiences I could soak up.

The summer camp was intense. It was a lot of work. It's pretty amazing to see how hard -- you know, you think you're doing everything that a professional athlete would do in the off season and then you come to a camp like that and see how much harder they work and take it to the next level on a daily basis. To be able to take some of that and use it in my game and my own season really helps to get you ready for the professional ranks. It was a great experience all around and I had a lot of fun.

Obviously, Flyers fans in Philadelphia haven't seen a lot of you. If you had to describe your style of goaltending to someone who's never seen you play before, how would you do it?

I'm more of a positional goaltender. I like to rely on my skating. Technically and positionally would be my strengths. I'm athletic, very composed and I play with a lot of poise. I try to use my size as much as possible as well to make things as easy as possible.

I guess my puck handling is something I need to work on, and as you go up you need a strong mind.  Everybody needs to work on that if they want to be a professional hockey player. It's something you get a taste of in juniors with hockey being as big as it is in Canada, there's a lot of pressure even on teenagers. It's something that's good to learn and it gets you ready for life in general, not just hockey. There's always going to be people putting you down or whatever and what really makes or breaks you is not how many times you get knocked down but how many times you get back up. 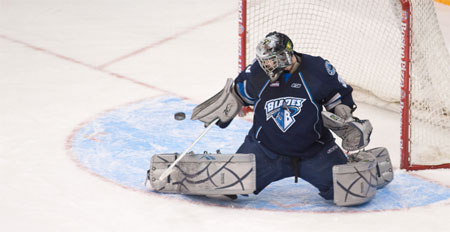 I talk to [goaltending coach] Jeff Reese and [scout] Neil Little, mostly. They call me or Jeff calls me once a month or so just to see how I'm doing and I'll call them if I have any questions or anything. Don Luce, director of player [development], has been very helpful as well. Like I said, I've been going through a bit of a slump right now. I'm not playing as well as I was in the first half and they've all been extremely supportive and they don't want me to start forcing things. They know they drafted me for a reason and I just need to remember that and continue to work hard and stay positive and sure enough things will come around.

Have they told you anything about their plans for you next year? You probably plan on staying in juniors? What's the deal there?

Yeah, I imagine I'll still be in junior. I still have two years of eligibility left in the Western Hockey League. If you look at goaltenders in the NHL you'll only find one or two who came right out of junior and are still kicking around. Most goalies, most NHL starters took a few years and didn't crack the league until they were 23 or 24. I know it's going to be a lot of work but I'm ready to work hard and move forward and do whatever it takes to play professional hockey.

There are several goaltending prospects in the Flyers organization, namely the guys in juniors with you, Jacob De Serres and Nic Riopel. Do you ever talk with those guys? Do you have a relationship with them at all?

I talk to Jake only because he plays for Brandon so we see him quite a bit. As for Nic, I haven't talked to him since Flyers camp but we had a pretty good relationship at camp. We were roommates and he's a nice fellow and another hard working goaltender. As for Jake, he's very friendly and we got along tremendously at camp. I guess the Flyers just have a knack for picking hard working goaltenders. He works very hard and he's got a great personality and he's easy to work with.

If you look at the Flyers right now, there's a lot of uncertainty at the goaltending position. Ray Emery is a free agent this upcoming July, Brian Boucher is next year, and then there are a few guys in the AHL who may or may not be the answer long term. Then, you look at the history and there's a pretty long and unfortunate history in the organization of not really having a dependable, consistent goalie.

So the question that everybody in Philly wants to know the answer to: are you the guy who finally gives this organization the answer in goal?

I believe I have the potential to be that goaltender, but they have a lot of good goalies in the system and all I can do is focus on how hard I work and how I prepare and take care of myself on and off the ice. I can't control what's going to happen with the depth and the goaltending in Philadelphia. All I can worry about is my next save and my next game. I'm not thinking too far ahead because I just want to focus on playing junior right now. I know when the time comes I will be able to give it my all and hopefully that's enough.

All photos are courtesy of the Saskatoon Blades.

A tap of the stick is in order to Derek Zona of SBN's The Copper & Blue for helping us land the interview. Also, much thanks to Dan Ukrainetz of the Saskatoon Blades for getting us in touch with Adam. And of course, great appreciation to Adam for taking the time out of his day to speak with us and for not having terrible facial hair.