Share All sharing options for: Steve Downie, still an embarrassment

As a Flyers fan, it's easy to hate Sidney Crosby. In some cases, though, it's also pretty easy to look right past that hate and see the stupidity, the irresponsibility and the lack of everything that is good in an action by another player, even if that action serves as a detriment to Crosby and the Penguins.

Situations like the one that former Flyer Steve Downie put the Penguins star in on Sunday afternoon are ones that absolutely, positively need to be removed from the sport of hockey.

The two were skating along the boards in the Tampa end after Crosby had just passed the puck across ice. Downie was on Crosby's tail, and he slowly tangled his leg with Sid's, bringing the Penguin down to the ice. On closer review, Downie clearly and deliberately lifted his leg, placed his knee behind that of Crosby and pushed. As the two reach the ice, Crosby's leg bends backward in a way legs simply aren't supposed to bend. 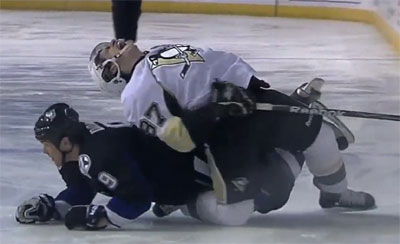 That's kind of a rough screen grab, but Crosby's knee is bending to the side here. He's not just in a kneeling position.

For maybe the first time ever, FSN Pittsburgh broadcasters Paul Steigerwald and Bob Errey actually got this one right. (Of course, it's a pretty easy call, but I digress.) It's clear intent to injure on Downie's part. There's literally zero reason for him to do this play in this situation, let alone any situation. The puck is 90 feet from the scene of the crime.

There's an argument here for trying to send a message. Downie was going after Crosby after he took exception to a Brooks Orpik hit on Steven Stamkos earlier in the game. There's no video readily available of the Orpik hit from what I can tell, but from watching it on rewind via NHL Game Center, I can tell you that the Orpik hit was more of a case of a guy finishing his check than it was a clear intent to injure.

Should Downie have gone after Crosby if he felt the Stamkos hit was over the line? Certainly. But going after Crosby means laying him out cleanly in along the boards with a clean hit, not popping a ligament in his knee with one of the dirtiest of dirty plays that exist in the sport.

If Downie got a 20 game suspension for his hit on Dean McAmmond, one that was ruled intent to injure, he deserves double that sentence in this situation. He's a repeat offender. He's a reckless idiot. He's an embarrassment to hockey.