The New Jersey Devils have pretty high ticket prices at the Prudential Center, especially for a team that never, ever sells out hockey games (lots of pissed off Devils fans reading this and scoffing at this line -- it's called hyperbole, people. We know the Rangers sell out your building sometimes.) and filled to just 88 percent capacity this past season. If you want a regular season seat in the lower level at center ice for example, be prepared to shell out 250 dollars. They call this seat a premium seat, and it's $150 more expensive than a similar seat at the Wachovia Center.

But for the playoffs, you can find tickets online for below face value, which is pretty excellent. Some charts and stuff after the jump.

Here's the official seating and pricing chart from the Devils. Click to enlarge.

And here's the listing for game one on StubHub. Again, click to enlarge. 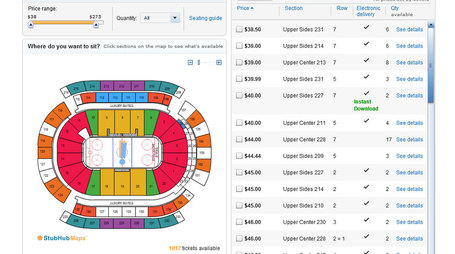 The colors don't match up on either chart, so we'll try to avoid confusion. But in what the Devils call the 'green' section in the upper level (sections 209-216, 236-232), where tickets are $40 at face value for the first round, you can get them just a few bucks below face at about $37 bucks a piece. Less than 50 bucks for a playoff ticket is pretty excellent, and there's really no reason not to invade the Prudential Center with prices like that.

If you're willing to shell out all the cash, too, you can get a lower level ticket rather easily still directly through the team. There are already going to be a on of Flyers fans at the Prudential Center for games one and two and probably five as well. Why shouldn't you be one of them?