To Touch Or Not To Touch? What To Do With The Prince Of Wales Trophy

Share All sharing options for: To Touch Or Not To Touch? What To Do With The Prince Of Wales Trophy

Broad Street Hockey Staff Writers Geoff Detweiler and Ben Rothenberg teamed up for this piece. And an update, HE TOUCHED IT.

As much as it may seem presumptive to be discussing this topic before the series is over, there's no other sensible time to have this debate.

Ben: So I was watching the final game of the Western Conference Final, which like the previous three was won by the Blackhawks, giving the team its first conference championship since 1992, way back before the "Western Conference" even existed.

But when they wheeled out the Clarence Campbell Cup to present to Chicago captain Jonathan Toews, he acted like there was nothing else in the world he'd rather be doing. Barely even looked at the trophy.

Why has it become so commonplace for players to reject the prize for winning their conference?

Geoff: Why? I wish I could answer that, but I don't know the origins of it. But I imagine the reason it's become so common place is tradition. When something is done for so long, it tends to stick. That's a pretty lame answer, so let me try these two.

First, it's not just the NHL. Last year, when the Lakers won the West, they didn't touch the trophy or seem too excited about it.

Why the NBA and NHL does this and the NFL and MLB don't is a good question. But hockey players are extremely superstitious. They won't touch the Stanley Cup until they've won it, they grow playoff beards (or mullets), and eat grilled cheese before every game. And when one thing isn't working, they change it. Like Brodeur shaving his beard or Crosby picking up the trophy in 2009 after not touching it and losing the Cup in 2008.

Ben:
I understand that the Stanley Cup is forever the ultimate goal in the NHL, and that to a degree anything short of that goal is considered failure.

If Mike Richards is fortunate enough to be presented the Prince of Wales trophy tonight (or Wednesday or Friday), as a fan I don't want to see him take that moment for granted. Sure there's a greater goal in mind, but there's also the (depressing) possibility that it could be the most important piece of hardware he is handed this year, or (more depressingly) maybe even in his entire career. 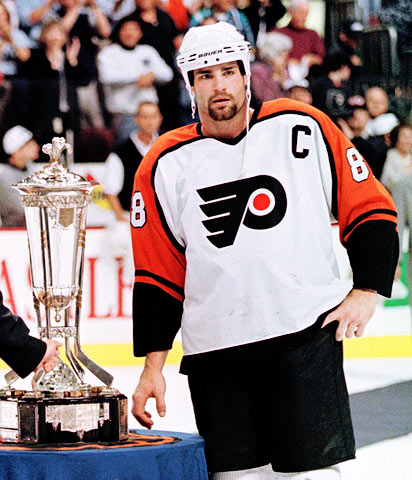 Take this photo of Eric Lindros from 1997 (right). He didn't touch the Prince of Wales trophy, and then his team was swept in the finals. Lindros was never on a team that won its conference again, so in some ways that photo represents the pinnacle of his achievement in the sport. And yet he's not smiling, not seeming to embrace the moment at all, and is even doing that same hand-on-hip thing that Toews did. That 1997 team was the most successful in terms of playoff achievement of any Flyers team in the last 22 years, and yet Lindros seemed to think that his #3-seeded Flyers making the finals was nothing worth relishing for even a moment.

You know who deserves to relish that moment if they achieve it? Veterans Daniel Briere and Simon Gagne, each of whom is in his fourth Eastern Conference final and neither of whom has ever won one before.

And so do the rest of the 2009-10 Flyers, if only because of the improbability of their run. That a team with the 18th-best record in the league during the regular season who made it into the playoffs in Game 82 through a shootout could win their conference is an absolutely remarkable achievement, and its not something anyone should scoff at, much less the team itself.

Touching a trophy is not tantamount to hanging a "Mission Accomplished" banner across the Wachovia Center. But it would create a moment that could be looked back at fondly for the rest of the team's history. And if the Flyers go on to hoist a more famous trophy in a couple weeks, the moment of winning the East could very quickly be sent into the archives.

Geoff: Well, those are all excellent points. But there are some flaws.

The ceremony built around the trophy presentation isn't exactly awesome. All of the players are stiff and they're forced to wear hats and t-shirts. The celebration occurred after the game was over when everyone surrounds either a) the goalie or b) the overtime hero. The players celebrate their feat in much the same way as MLB and the NFL does, they just don't care about the trophy. There's something to be said for players who walk past their conference/league championship trophy and just pat it, but I don't think the ceremony demands that players do something. They can celebrate their win how they choose.

And if the players choose they want the pinnacle of their careers up to this point - as in Briere or Gagne - to be cherished, I'm pretty sure they can do that in ways other than touching a trophy. They can enjoy it in the post-game scrum, the post-game locker room, the ride home, when they spend the evening with their wives, when the season is over and they get their Eastern Conference memorabilia, or when they see the banner raised the next year. But this is getting away from the act of touching the trophy. 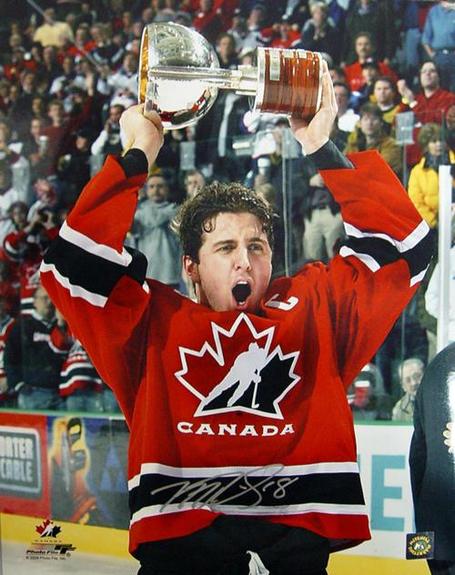 It is the Captain who shuns the hardware publicly, but I'm sure you're not advocating for the entire team to touch it, carry it around the ice, or even pose for a photo with it. So really, this is a hypothetical argument involving only Mike Richards.

Truthfully, I bet Richards could care less about the Eastern Conference Trophy. I mean, the guy has won a Memorial Cup, a Calder Cup, a World Juniors Silver Medal, World Juniors Gold Medal, and Olympic Gold. The only thing left for him to win is a Stanley Cup. If he never wins one, I'm pretty sure he's not going to look back at the time he won a Wales Trophy and didn't touch it as a mistake.

Maybe players should smile when the accept the trophy. I mean, it's not like they're standing next to Gary Bettman. But touching it? Being happy that they won a trophy only about 500 people know the name of? Nah. The players can be proud of their accomplishment - as they should be - but wait another 2 weeks before they giggle like school girls over a trophy.