We've spent the night celebrating the Flyers trip to the 2010 Eastern Conference Championship, as many around the city and the region have also done.

After the jump, in similar fashion to the time capsule we put together following the Flyers' miraculous Game 7 win against Boston, we take a look at how the media covered the Flyers' Eastern Conference title on game night, how the fans celebrated, and how the opponent suffered. Clicking forward will be display a lot of images and will be bandwidth heavy, so beware.

Click images below to enlarge. Some video is embedded, some is linked out where embedding is not possible.

The front and back pages of the Philadelphia Daily News:

VIDEO: CSN's John Boruk wraps up Game 5 and the series.

PHOTO: Fox covers the scene at Frankford & Cottman in the Northeast.

VIDEO: NBC 10's Tim Furlong reports from inside the Wach during Game 5. 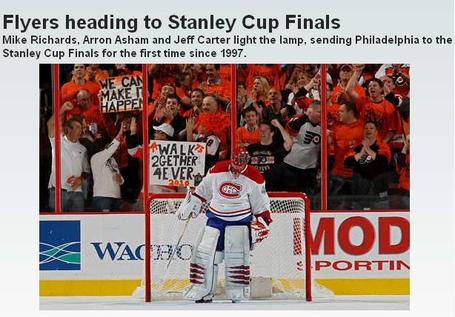 If your local paper isn't included, feel free to scan it in this morning and place it in the comments. We'll add it to the group above. Add anything else you'd like to include in the comments as well.