How Not to Backcheck

Share All sharing options for: How Not to Backcheck

The Bruins second goal could be considered a 3-on-2 goal, but a more accurate description would be a 2-on-2.  Miroslav Satan made the score 2-1 Boston with his second period goal, swinging the momentum.  Similar to the Sharks goal in Game 3, blame can be spread around.

Jump for pretty pictures of an ugly play.

This whole thing happened pretty quickly, and it all started with Mike Richards firing a shot from above the far circle: 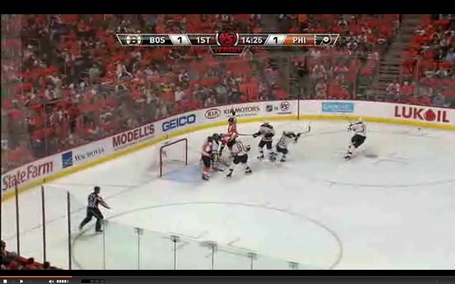 Here, Dan Carcillo is to Tukka Rask's right, with Matt Carle raising his hand and Scott Hartnell currently falling down.  Hartnell had rushed to get in front of Rask for Richards' shot, but promptly ran into multiple players - pushing Carle out of the way - and fell down.  Chris Pronger and Mike Richards are not pictured, currently situated to stop a Bruins 2-on-2 rush.  Oh, by the way:  The goal-scorer is currently about 6 inches in front of Dan Carcillo. 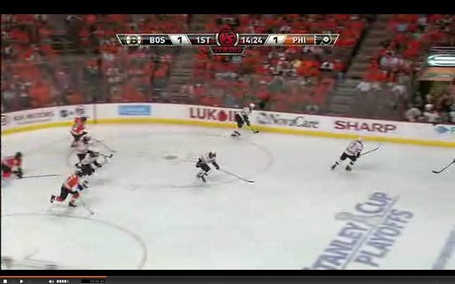 This photo, taken 1 second later shows Hartnell picking up his stick, Carle turning, and Carcillo skating.  It's looking like a 2-on-2, with Carcillo the trailer.  By the way, this will be the last time you see Scott Hartnell in this play. 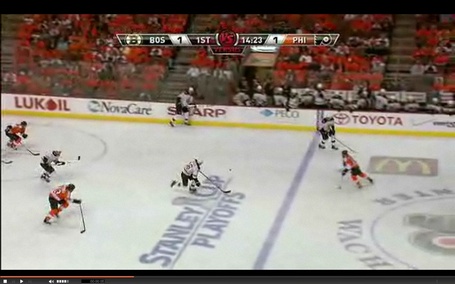 Chara appears to be heading to the bench, and Carcillo is still skating hard to get back in time.  Richards sees the puck going to Krejci and looks for the big hit.  In hindsight, not a good play.  But he saw Pronger able to cover Lucic and Carcillo getting back.  Carle is also skating hard, so at the time, he wasn't making a bad play. 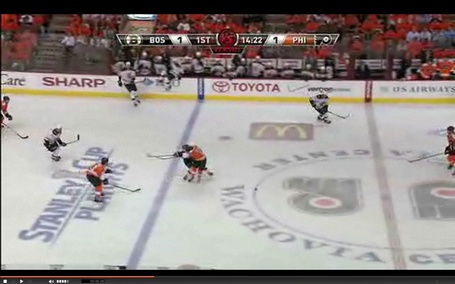 Annnnnd impact.  Richards takes out Krejci, while the puck glides toward the Flyers' zone.  Right now, it's Krejci v. Pronger.  The team still looks well-positioned defensively.  Except for Hartnell, who could be doing anything right now for all we know. 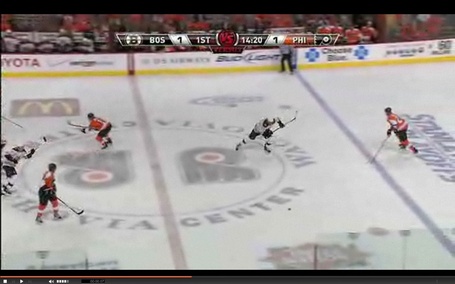 Here we see Lucic about to win the race to the puck, Carcillo has hurdled over Krejci and is simply trying to maintain balance, while Richards has stopped skating thinking how cool he is.  All of this is happening while Satan saw the collission and decided to go around instead of over, like Carcillo did.  Because of this, he's the only one skating.  Now, things don't look so good. 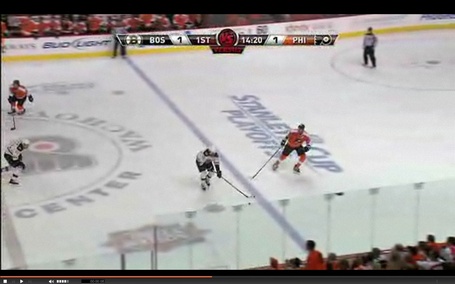 Pronger is positioning himself to stop Lucic, but Richards is standing still while Carcillo now notices Satan skating right down the middle of the ice uncovered.  Crap. 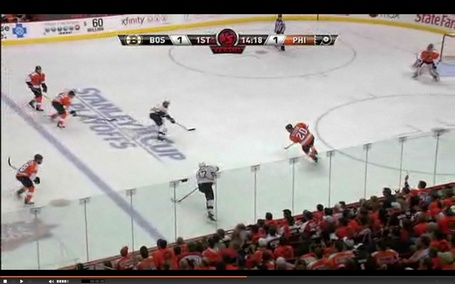 Richards has finally started skating again, but Pronger gets spun around by Lucic's pivot.  Carcillo is once again not skating while... BOOM look who comes out of nowhere!  Matt Carle has hustled all the way back from getting run into by Scott Hartnell and has passed both Dan Carcillo and Mike Richards.  THAT is how you backcheck.  Dan Carcillo is embarrassed, Richards still thinks he's awesome. ("You're awesome Mike!") 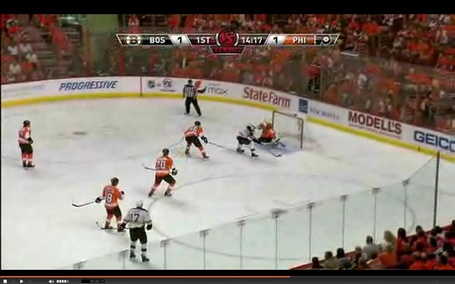 Boucher is unable to make up for his team's poor performance, as Richards and Carcillo have become spectators.  Carle tries a stick check, but at this point he's most certainly gassed.  Pronger is positioning himself should the puck go into the corner, and Scott Hartnell is... probably talking to Zdeno Chara about his impending assist.

So, Matt Carle busts his ass from goal-line to goal-line while Hartnell tries to stand up, Carcillo glides half the length of the ice, Pronger gets spun, and Richards congratulates himself.  Really solid work there guys.