Chicago Tempts The Hockey Gods: How Much Bad Karma Can One City Create?

Share All sharing options for: Chicago Tempts The Hockey Gods: How Much Bad Karma Can One City Create?

It all started a few months ago, with this: 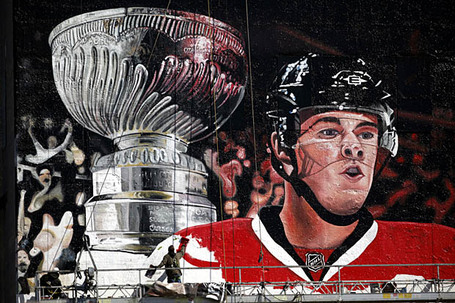 Some jerk decided to paint a mural in Chicago, visible from a major highway in that city, and die-hard Blackhawks fans knew the implications of this pig-like monstrosity. Putting Jonathan Toews, or at least a pathetic attempt of a portrait of the 'Hawks captain, on the side of a building alongside the Stanley Cup is a death wish. There's no way the team will be winning the Cup this spring, or any spring until that thing is taken down.

But then, the playoffs came. The Blackhawks rolled through the Western Conference after a minor scare against Nashville in the first round. Vancouver? Pesky, but ultimately not a problem. San Jose? Clearly not an issue whatsoever.

That team in the East that finished in 18th in the league, a full 24 points behind the Blackhawks, certainly wouldn't be a bother, right? It looks as though the mural from months earlier would prove inconsequential.

So, it won't matter then when the rest of the city decides to get on the "hey, we've already won this thing" bandwagon as well. Some more examples of a city toying with the hockey gods at every possible turn, after the jump.

We all remember 1997 (well, unless you're younger than 13, I guess). Philadelphia Mayor Ed Rendell decided to try a policy of appeasement with Billy Penn and his curse, much like the City did in 1993 when they put a Phillies hat on the giant statue that sits atop City Hall.

The City adorned Billy Penn with a giant Flyers jersey after the team beat the New York Rangers in the Eastern Conference Finals that May, and the favored Flyers were swiftly swept out of the playoffs by the Detroit Red Wings. Mayor Michael Nutter learned the lesson by 2008 when he opted not to put a Phils hat on top of City Hall while the team was in the World Series.

They beat the Tampa Bay Rays in five games, we remember. So, the message was clear, right? Don't put jerseys on statues when your team makes the championship round. Would Chicago heed the warning? 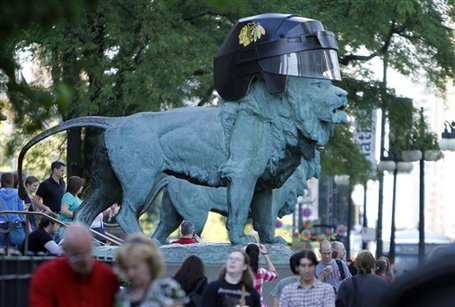 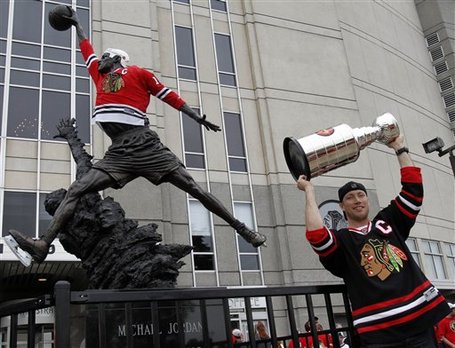 Oh, right. Of course not. But that's not as bad as it gets!

No, the largest paper in town decided to literally hand out Stanley Cups to its readers. 516,000-plus of them, to be exact. Yes, the Chicago Tribune printed a page in its paper prior to the start of the Stanley Cup Final with a cut out Stanley Cup, headed by 'You will hoist the Cup.'

This cut out still appears on the Tribune website in PDF form, meaning many more than the paper's half a million subscribers can take advantage of its jinx. If this were the Daily News, I'd probably wind up boycotting the paper for the entire summer after the Flyers' inevitable loss.

But seriously, that's not even as bad as it gets.

Check out this website, stanleycup2010blackhawks.blogspot.com, where they are, right now (!), selling 2010 Stanley Cup Champion Blackhawks banners. The site went live on May 27, apparently, two days before the Cup Final began. The page says the following:

It's just a matter of time until the Hawks take the Stanley Cup. Get a piece of history to hang on to, and remember these historic times.

The banner is pretty terrible (not to mention likely illegal), and it doesn't even use the official Stanley Cup Champions logo, instead opting for one that looks more like the 2008 Red Wings championship logo than the 2009 version or the eventual 2010 version. But execution doesn't really matter at times like these. It's all about the intent. 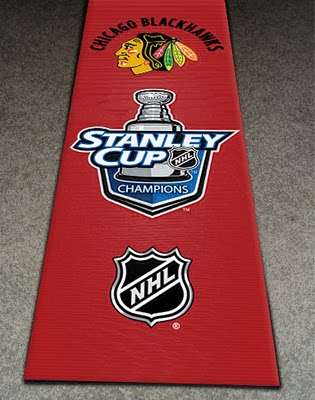 Who knows, all of this stuff might not even matter. The Blackhawks might win the Stanley Cup on Wednesday night in Philadelphia, or even Friday night back in Chicago. But man, tempting the hockey gods like this is a risky way of going about it.