In the last day of the Flyers 2010 Prospect Camp, the players jumped on the ice at 9:30 am for a scrimmage.

Surprisingly, there weren't that many people in attendance, which is sad since it was a pretty good game.  As has been true all week, it was pretty sloppy, with missed passes, shaky goaltending, and missed penalty shots.  Oh, and Zac Rinaldo dropped the gloves.  Again.

Again, check out the BroadStreetHockey YouTube page for videos from the game.  Rather than take videos from the opposite end of the ice, I got 10 of the 11 shootout attempts taken on Bobrovsky (I wasn't quick enough to get Bobrovsky stopping Chaput) and Morrison's final save to seal the game.

Yes, the Black Team won 4-4 (2-1 in shootout), taking the series 3 games to 2.  Apparently the Curse of the Black Jerseys doesn't affect prospects.

Jump for the bullet points from the final day of camp. 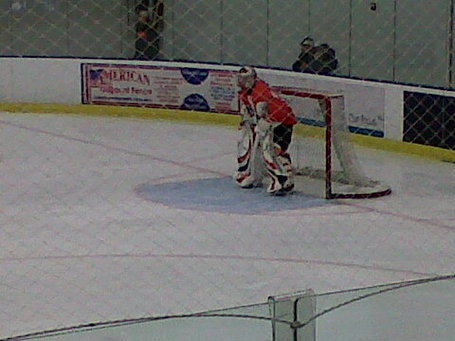 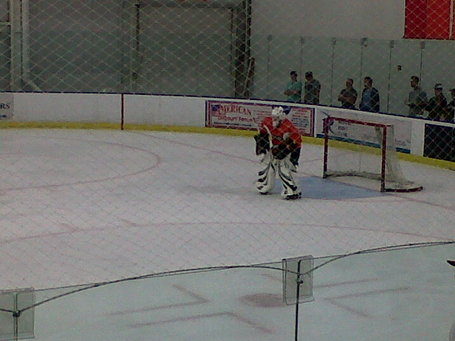 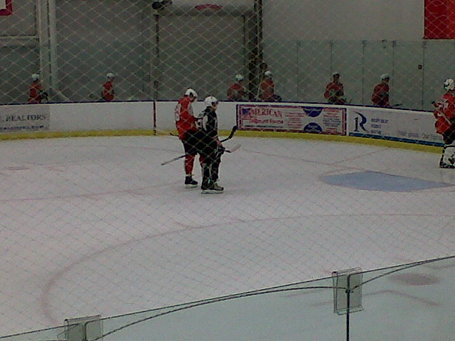 Since there were only three goals scored by the twenty-two shooters, we'll just run down the list of players stopped by each goalie.

Morrison stopped: Wellwood, Ginand, Hanson, Testwuide, Hatcher, Rowe, Holmstrom, Ranford, Banwell, and Blidstrand after giving up a goal to Gustafsson in the first round.

Go to the BroadStreetHockey YouTube page to see video of Bobrovsky's shootout and Morrison's save on Blidstrand.