An awkward Flyers moment during Patrick Sharp's day with the Cup

Share All sharing options for: An awkward Flyers moment during Patrick Sharp's day with the Cup

Patrick Sharp has always been one of my favorite hockey players. Since his days with the Phantoms, winning a Calder Cup back in 2005, to the day he was traded from the Flyers organization to Chicago, I've always wanted him to do well.

While that wasn't necessarily one of my thoughts as he bolted across the Wachovia Center ice immediately following Game 6 to celebrate a Cup with Patrick Kane and his Blackhawk teammates, now, a month later, I can be happy for him. And as I watched a few videos today on NHL.com chronicling his day with the Stanley Cup, those were the feelings that came up.

But there was one moment, between Sharp and the driver of a big party bus that carried him and his wife (sister?) to the airport to pick up the Cup, that seemed a bit awkward to me.

I'm just gonna tell you one thing and then I won't bug you for the rest of the day. Thank God you beat Bobby Clarke. It would've been a crappy summer if Philly had the Cup.

We love the hate, don't we? Even from some bus driver in Western Ontario. I take it as a source of pride. But that's not the reason I'm writing this.

Before using up his one comment quota with a Cup Champion, the bus driver probably should've considered that players history. You know, this is Patrick Sharp here. The same Patrick Sharp that said the following just weeks ago, via an NHL.com article.

"Leaving Philadelphia, I understood the situation here," said Sharp, who was 24 at the time of the trade. "They were a first-place team, pushing for a championship, and it was tough to break into that lineup. I was thankful for the Flyers trading me to a great place that gave me the chance to play.

"When I got traded to Chicago, they were a team that was developing in all areas, and they gave me the opportunity to play in all situations."

Thankful to the Flyers for trading me. Giving me a chance to play. Hmmm.

Who was the guy that traded Patrick Sharp to Chicago, giving him a chance to play and break into the NHL on a regular basis, ultimately granting him the opportunity to fulfill his potential, realize his talents, win a Stanley Cup, step out of his front door in Thunder Bay and shake hands with a bus driver who's taking him to the airport to pick up that Cup? 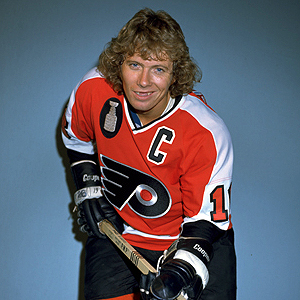