Today, the Flyers kicked off their Prospect Camp at the Skate Zone in Voorhees, New Jersey.  They are scheduled to have 4 days of morning practice followed by a late-morning scrimmage in the next 5 days (tomorrow they are having their yearly Trial on the Isle), and we hope to get to as many as possible.  All details can be found on the Flyers website.

These events are really fun to go to as only about 75 people were there for practices - split among the two rinks - and about 125 showed up for the scrimmage.  If you get a chance, it's definitely worth attending.

While there, I was a nerd and took notes.  Now, before giving you the notes, it's important to realize that this was the first practice in July for players who will either return to the minors or play small roles on the Phantoms.  The only big names in attendance are Marc-Andre Bourdon, Kevin Marshall, Sergei Bobrovsky and Nicola Riopel, while the only other players who spent time in Adirondack last year are Shane Harper, Ben Holmstrom, Erik Gustafsson, and Brian Stewart, all of whom have signed since March of this year.

Again, both praise and criticism needs to be muted as this was just one practice, and the first one at that.  Any conclusions based on the observations are premature until at least the end of the week.

My affinity for goalies is still going strong.  I spent almost all of the practice time watching the rink that Nic Riopel, Sergei Bobrovsky, and Brian Stewart were on.  Bobrovsky is wearing the same pads that Ray Emery wore this past year, with a Michael Leighton white helmet adorned with a Flyers sticker. 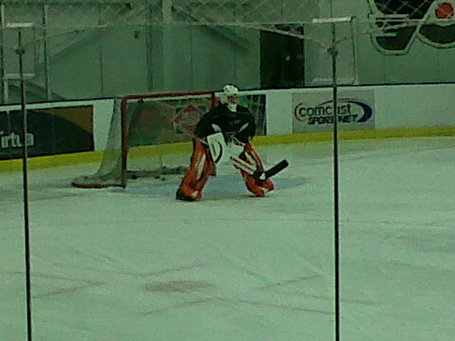 Now, Bobrovsky was rather disappointing today.  In practice, most goalies stay standing to block the low shots in the beginning, but after both Riopel and Stewart started dropping into the butterfly, Bobrovsky kept getting beat low while still standing.  Obviously, he wouldn't do that in a game, but it struck me as lazy.

When the team skated a lap before re-organizing, Bobrovsky reinforced my negative opinion of him as he glided along the ice.  Just to be safe, I checked and saw the other two goalies moving their feet.  Maybe Sergei was still tired, but not a good first impression.

It wasn't all bad for Sergei though, as he showed good lateral movement during the 2-on-1 drills.  He stays tall when he is in the butterfly and looks very composed when going side to side.  In the scrimmage, he showed some excellent puck-handling skills and he used them fairly often.

I think it's safe to say I'm officially on the Nic Riopel bandwagon.  Now that De Serres is a free agent, Riopel is my favorite Flyers goalie prospect in North America.  As a bonus, Riopel's helmet is pretty awesome, even if you can't see it.  On top is a Flyers logo that morphs into a Phantoms logo. 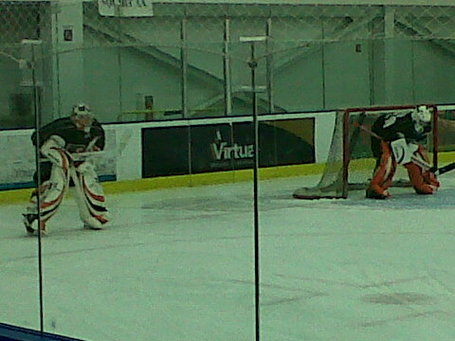 Throughout the practice, Riopel looked good.  He needs to work on rebounds off his pads and showing patience on breakaways, but everything Tim McManus said about him is true.  While Bobrovsky looked lazy today, Riopel looked determined.  He was taking the practice very seriously, evidenced by his perfect form in covering up the puck after making a save.  During the two-on-one drills, Riopel wouldn't just make the save and move on, he'd cover up and put his head down as if he was waiting for a whistle only he heard.  He was all business today, which is very encouraging.

Someone else who impressed during practice was Erik Gustafsson.  The undrafted free agent signing showed good poise and an ability to break up one-on-one and two-on-one breaks.  He even showed a physical side later in the one-on-one drill as he knocked someone off the puck, then took him into the boards after the rebound.

Moving on to the scrimmage, Riopel and Chris Rawlings (G, Northeastern, tryout) were the two goalies who did not participate.  Stewart and Bobrovsky started and it wasn't long before Bobrovsky gave up a soft goal.  Eric Wellwood (LW, Windsor OHL) got pick-pocketed and the puck wound up in the back of the net.  Not a good start for Bobrovsky,

Wellwood rebounded from that miscue and showed some puck-handling skills, as he's good at navigating through traffic.

Zac Rinaldo (C, London/Barrie OHL) showed some strength as he bounced off a check and watched as the other guy went down.

Stewart showed poise as he stood tall through a screen and let the puck hit him before covering up.  Not long after, though, Mike Testwuide used his size to create space for Ben Holmstrom to tie it up from the slot.  Later, he sprawled out with the left pad to stop a min-breakaway. 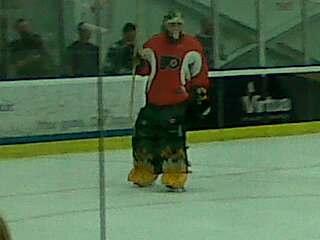 The problem with Testwuide, though, is that he lacks puck-handling skills.  While it's probably unfair to expect a big man (6'3", 210) to dangle, he more than once lost the puck while having a great scoring opportunity. 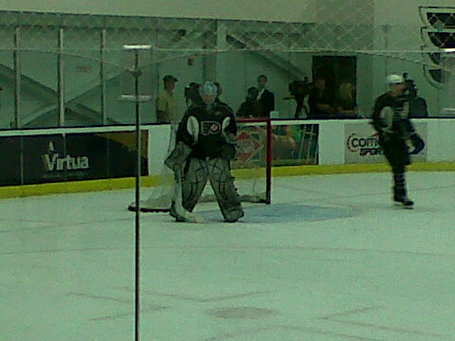 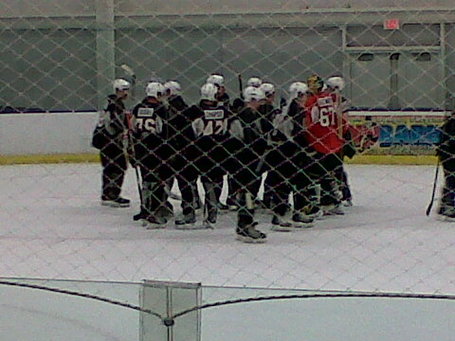