Share All sharing options for: Gagne says on French TV that he hasn't waived his no-trade clause 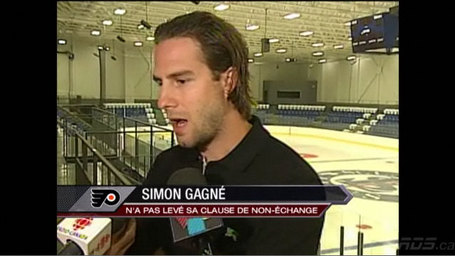 Click the image above to jump to video of Gagne's interview at RDS.ca.

According to the French-language, sometimes journalistically inaccurate RDS, Simon Gagne has not waived his no trade clause, as previously reported by local Philadelphia media. I don't speak much French, so I don't understand what Gagne is saying in the video above. I can, however, translate what's said on that graphic, and it says that Gagne hasn't waived any type of no trade clause.

Despite the reputation RDS has of reporting information that can be less than true, this is coming straight from Gagne himself. It doesn't get any more direct than that. At the same time, this doesn't necessarily mean that Gagne won't waive his no-trade. It just means he's yet to do so, potentially because the Flyers haven't come to him with a potential destination yet (although, that's just speculation on my part).

Who the hell knows what to think anymore?