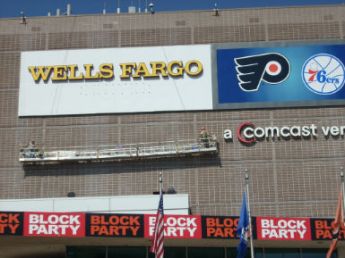 Image via KYW 1060. View a full gallery with more photos at their site.

The letters were pre-crafted by Eastern Sign Tech of Burlington, NJ.  Installation manager Jamil Halstead says the Wells Fargo signs will be completely installed in time for the Lady Gaga concert on September 14th:

"The project is a month long, as far as in-the-field work.  In the shop, it’s probably two months long."

I'm not sure what I would've done if the letters weren't up for the Lady Gaga concert!