Catching up with Erica Gagliardi, "the next little Kate Smith"

Share All sharing options for: Catching up with Erica Gagliardi, "the next little Kate Smith"

Ed. Note: Shaun Kreider had a chance to chat with Erica Gagliardi recently. His story appears below.

There are a few different names that are synonymous with the voice of the Philadelphia Flyers. The most well-known is, of course, Hart, for both play-by-play announcer Gene and his daughter and current anthemnist, Lauren. No one will ever forget Kate Smith, the booming voice that seemed to encapsulate an era with her ability to will the team to victory.

In the mid-90's, there was one other lesser-known voice that took to the Philadelphia ice: Erica Gagliardi.

From 1992 to 1997, the South Philly native sang the anthem approximately 200 times before the puck dropped at the Spectrum and the then-Corestates Center. Her number one-and-a-half jersey engulfing her, she would step out onto the carpet and let loose a voice that enveloped her tiny frame.

Though she’s remembered fondly in orange and black, her journey actually began in red and blue. At just seven years old, she was approached by the 76ers mascot -- it was a DJ at the time, not that big rabbit.

After noticing her performance at a church, he asked her to sing the anthem for the Sixers.

"That was my first public appearance, I was nervous as anything," Gagliardi told us in a phone interview. "After that I started doing a lot of the Sixers games. That’s when Linda Held from the Flyers contacted my parents. Ever since then I would do every single game."

Growing up in a house of hockey, her interest in shinny was a birthright.

"I was [a hockey fan] only because my father and his brothers played hockey growing up. My brother played hockey, so I didn’t really have a choice."

At first, her young mind couldn’t wrap around what was happening. Unaware of the large shoes she was filling, she quickly came to realize the importance of her role.

"All I know is that everybody kept on saying ‘the next little Kate Smith’ and I had no idea who she was. "

After she did some research with her father, she began to see how complimentary the comparison was.

"It was just awesome. It was totally awesome."

Soon she would come to idolize Smith, and ultimately, she'd get to sing a duet with her new idol. Ironically, it would seem that Smith was bad luck for Gagliardi. 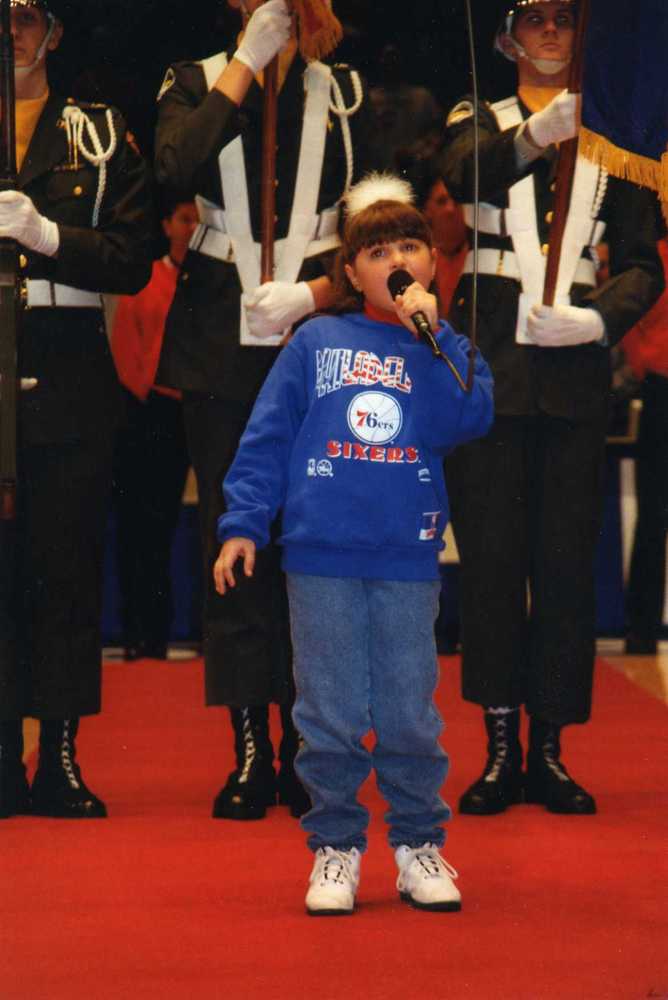 On April 30, 1995 the Flyers were set to play the New York Rangers in the second to last game of the season. A nine-year old Gagliardi took her place, as always, only this time she wasn’t belting out the "Star Spangled Banner."

"My first game, ever, that I sang ‘God Bless America’, they actually did a split-screen of me and Kate Smith. For a little girl that’s a big thing. Still to this day that had to be the most amazing moment of my life. Like, I cried after."

"I just felt so special. But even now, watching Lauren Hart do it as well, ... I still got the chills, even though it wasn’t me out there. It’s just an amazing feeling. Knowing stuff about her now, after I, I could say, sang with [Smith], I definitely did idolize her."

Unfortunately, Gagliardi would only get the chance to have that feeling once. In the first period, Eric Lindros wound up for a slap shot that deflected off of Jeff Beukaboom, came back and caught him in the face. He suffered a cut that would put him out for the last game of the regular season and a couple games in the playoffs.

"All I know, right after I got done, first period, he was bleeding everywhere. They were like, ‘Ok, well, we’re not doing that again.’ I’m like, 'great, tell a 9-year old that!' But it was still cool. It’s just part of the game."

Still, knowing what she knew of Smith and her record, Gagliardi could understand the implications of the events.

"I know that there’s a lot of superstition with the Flyers. I was never allowed to sing it again. It was their call."

Although he had ruined her chance at reliving her best moment, Lindros remained Gagliardi’s favorite player. Her position with the team allowed her to see him up close and personal -- in fact, maybe a little too personal.

"I met him for the first time in his underwear. I was probably 9 years old and here’s this dude just sanding there. I think he was in his boxer shorts, but he had no shirt on and I’m like ‘Oh my god!’ I remember the whole entire moment."

Lindros wasn’t the only member of the Broad Street Bullies that Gagliardi would get to meet.

"We actually got close with [Rod ]Brind`Amour and [Dainius] Zubrus, when he came on [the team]. To be acknowledged by them, it’s amazing. I will say, I started doing the Phantoms, I was close with a lot of them as well. So they get to know you."

Even the Flyers fans, infamously known for their ability to intimidate, were accepting and kind to the young vocalist.

"I would take my jersey off to go sit in the stands with my mom and dad. They would talk to me, we actually had exchanged numbers with a lot of families to keep in touch."

As her stint as an anthemnist came to a close, she started sharing the spotlight with the next voice of the Flyers.

"Once they had brought Lauren Hart in, I started doing a lot of the matinees. It was definitely a big change because I was used to doing every single game. Then they brought Jim Longacre in and so we were all kind of just taking turns.

And then it all ended." 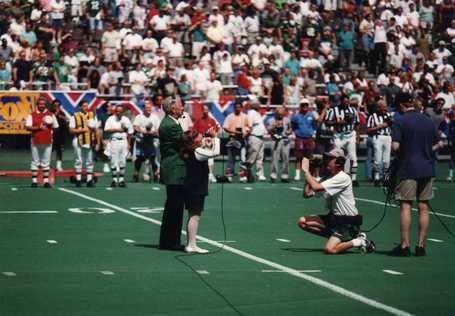 Erica singing the anthem at an Eagles game.

In her final days on Broad Street, she regularly sang for the Phantoms. Her voice was so popular she actually caught the eye of other Pennsylvania-based teams.

"It was cool because I was getting ready to sing the anthem and the Hershey coach [Bob Hartley] would always come up to me and say ‘Why don’t you come sing for us?’ Everybody was like, ‘Don’t talk to him, it’s a jinx!’"

Gagliardi admitted that she wouldn't have joined the Bears even if they were serious, despite the fact that her career singing in Philadelphia sports was coming to an end. Perhaps that was a smart move, because in no way has her music career come to an end. Now 25 with a husband and three children, Gagliardi is the lead singer of the Philadelphia-based band The Business. Specializing in covers, the band plays functions and bars all throughout the Delaware Valley.

"They actually contacted me, I was with another band at the time. I would always do competitions, so we would always have to travel and do promo gigs. At the time, I just wasn’t ready to switch."

It took some mobsters to bring Gagliardi into The Business.

"They actually did a show at Harrah’s in Chester, and some of the Sopranos cast was there. Right after I heard that I was like ‘Okay, I think I’m going to go with this.’ Not just because of that, but they put on an amazing show. Just unbelievable, you don’t see anybody sitting the entire night."

While she loves singing in the group, her personal aspirations are to make it on her own one day. In her free time, she’s worked with Scott Storch, a producer who has collaborated with Beyonce and Christina Aguilera.

"I do love singing in a band, don’t get me wrong. But my whole life, basically since everything ended with being an anthemnist and all that, I’ve been recording so much that I would just love to have someone pick me up and let me write all the time.

I just love to write my own stuff. It’s hard with kids. I still try to keep up. On the weekends, I’m with the band. I’m in the studio in the mornings and sometimes I do have a show at night as well. I would love to just do something original and get it out there." While she was instantly recognizable when she stood four feet tall, these days she’s not exactly a household face. That doesn’t mean she’s faded from the public consciousness, however.

"I still keep in touch with Angelo Cataldi from WIP, cause I did a lot of work up there as well when I was little. They were talking about how they were coming out with a stamp of Kate Smith. They were like ‘You know what, they should come out with a stamp of little Erica Gagliardi,’ I just thought that was so cool. I’m like ‘wow, they still remember me!’"

While she may be in a successful band and recording with known producers, she still looks fondly on those years at Broad and Pattison.

"Nothing is as big as the Flyers and the Sixers, and even the Phantoms, they had a good crowd as well. Nothing can compare."

Thanks to Erica for giving us the opportunity to share her story and for all of the photos that accompany this story.