Name That Line: Introducing the 16 Finalists (And Voting Round 1)

Share All sharing options for: Name That Line: Introducing the 16 Finalists (And Voting Round 1) 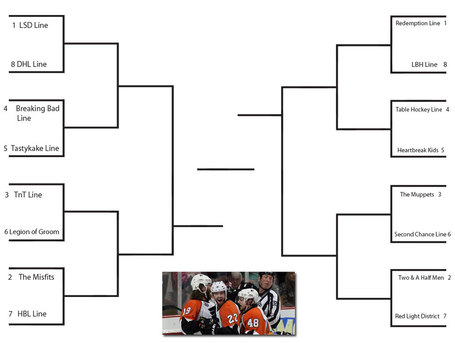 Click to enlarge. Not the best Photoshop work, but it'll do.

We're determined to name the Scott Hartnell, Danny Briere, Ville Leino line, so over the course of the next week or so, we're going to vote in bracket format on the best suggestions we've come across. We've taken the 16 best and placed them into the bracket above, seeded according to apparent support.

By mid-week, we hope to settle on a nickname, and we'll do our part, with help from others, to get this name made official. (Really, all we need is a mention from Jim Jackson, which we think we can probably get done.)

So let's get started, shall we. Our first matchup is between the first-seeded "LSD Line" and the eighth-seeded "DHL Line." Descriptions after the jump.

The name is the brainchild of PhillyGirl1437 on Twitter, and her explanation is pretty simple. Leino, Scott, Danny...and Scott is always tripping. If you live under a rock, LSD is an acronym of the technical name for acid. Yes, the drug.

DHL, of course, is a shipping company. Danny, Hartnell, Leino are on the line. Not sure exactly what the connection is between the shipping company and the line, but it's an eight seed for a reason. HEY, THE FLYERS WERE A LOW SEED LAST YEAR, IT'S POSSIBLE. Not sure who came up with this one, but we'll give you credit if you let us know.