(NOT) BREAKING NEWS: Sean Avery Is A Terrible Person

Share All sharing options for: (NOT) BREAKING NEWS: Sean Avery Is A Terrible Person 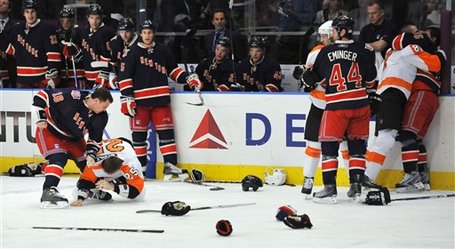 This is Matt Carle's first NHL fight. Sean Avery proceeded to smash his head in three times here. While he was down. He is scum, and that's putting it lightly.

Oh, and for any Rangers fans trying to compare this to Dan Carcillo's beatdown of Marian Gaborik a year ago. A) Gaborik started that, and B) Carcillo actually caught Gaborik on his way down. The Rangers were losing 3-0 tonight and they decided to goon it up, and unfortunately, it almost worked for them.

We'll have more on the game in the recap shortly.