Video Breakdown: Sean Avery, Rangers Goon It Up Against Flyers

Share All sharing options for: Video Breakdown: Sean Avery, Rangers Goon It Up Against Flyers

The 8:32 mark of last night's game between the Flyers and New York Rangers was jut an absolute nightmare. It all started with Brandon Prust and Darroll Powe getting into things behind the play, but by the end, Matt Carle was getting a beat down from the game's biggest joke, a Ranger mainstay was leaping onto the back of the Flyers' enforcer, and a too many men on the ice call went unseen.

Full video breakdown after the jump. Warning: it's image heavy and it might take a second to load.

So we begin with the start: Matt Walker separates Brandon Prust from the puck, it comes back to Prust, and Darroll Powe steps up and hits Prust again. 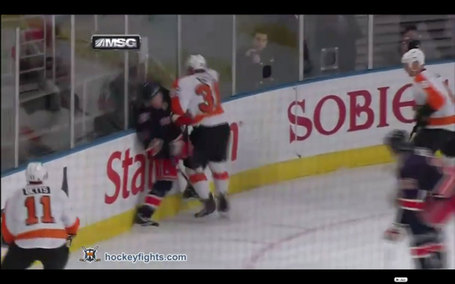 Prust didn't exactly like that. He punches Powe in the face... 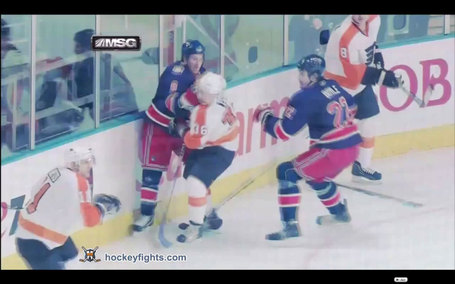 ... Powe falls over, and Prust goes to get his stick. Prust turns around and Powe's just getting up. Prust, still hotheaded over an essentially meaningless hit, takes another shot at Powe. 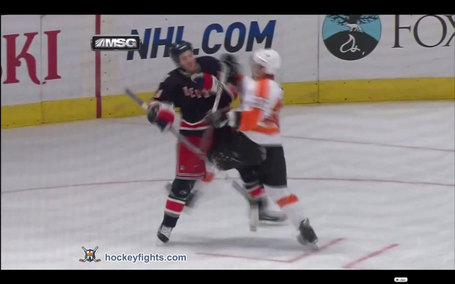 So now Powe's irritated. He steps up to Prust and they jaw at one another and wrestle around a little bit while the play moves up ice. The linesman gets between them to break things up, but Matt Walker comes in to defend his teammate. Not that Powe can't defend himself, but whatever. 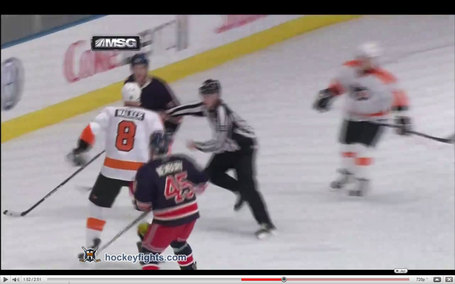 This is where things start to get fun. You see Kris Newbury there skating up behind Walker. He decides to be pretty dishonorable (since Rangers fans love that word) and he'll knock Walker down from behind. Pretty sure Walker never even knew he was there. 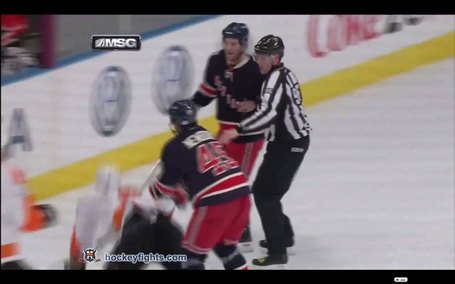 So Newbury decks Walker from behind while Prust hides behind the linesman. While Walker's getting up near the boards, Newbury cross-checks him in the head... 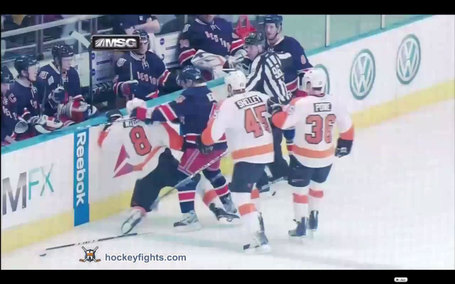 ... and that's when Shelley jumps in. He jabs Newbury to try to take him off the defenseless Walker, but then the cross-check happens. So, in defense of Walker, Shelley gives Newbury a shot to the face. 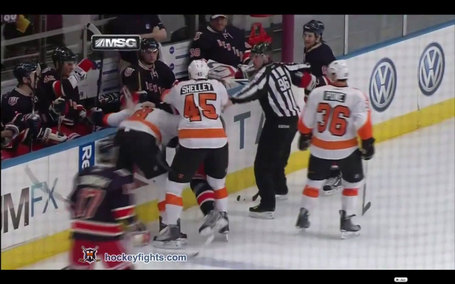 Now, Walker's back up and able to defend himself, so it's he and Shelley on Newbury. It's probably about now that Newbury wishes he didn't hit a Flyer from behind. But don't worry, little buddy! Brandon Dubinsky is here to save the day! 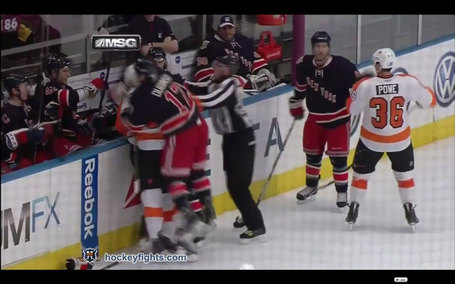 Now it's really starting to get fun. We have Dubinsky on Shelley's back like the little kid in Little Giants, Powe and Prust are ironically tangled with each other again, and Walker's somewhere in there putting Newbury in a headlock. Everybody separates, and now word is getting to the rest of the guys on the ice that something might be going on over here. 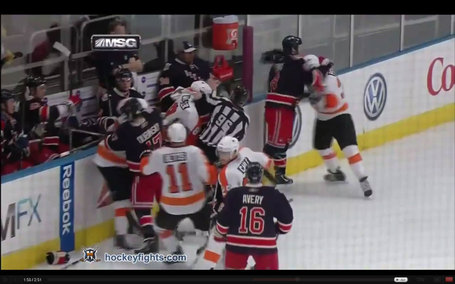 Sean Avery, Matt Carle and Blair Betts wander over. Betts doesn't know where the hell to go, and Avery, positioned behind Carle, clearly says something because Carle turns around. 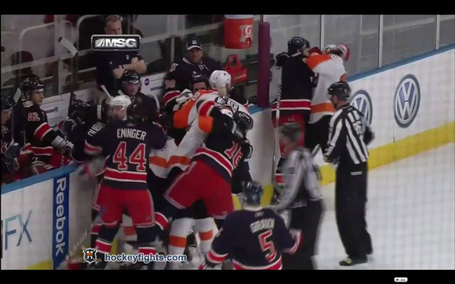 Now it's a melee. You'll notice that two Rangers -- Dan Girardi and Steve Eminger -- have joined the scene. Betts has gone to pull Dubinsky off of Shelley, because he's still wrapped on top of his back like glue, so Eminger comes to help out there. Meanwhile, Carle has hold of Avery, Walker has a pretty good handle on Newbury by this point and Carle and Prust are just dancing.

But Girardi, hm. Why doesn't he have a dancing partner? Oh, because the Rangers had too many men on the ice. You'll notice here that Girardi realizes this and tries to duck and hide behind everybody. Pretty funny. 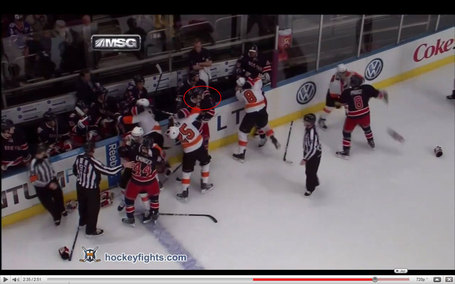 We all know what happens next. The Flyers are all occupied by Rangers (and there's still one Ranger left open). So there's Carle, who just grabbed Avery because he needed to grab somebody and Avery was closest. Avery pins him along the boards and for a little while, Carle's able to just hold him off. I'm sure that's all he wanted to do, anyway. Carle's obviously not a fighter, and he'd never been in a fight in his NHL career before.

But then, Avery gets the shirt up over the head of Carle and starts laying down blows. Real manly of you, Sean. 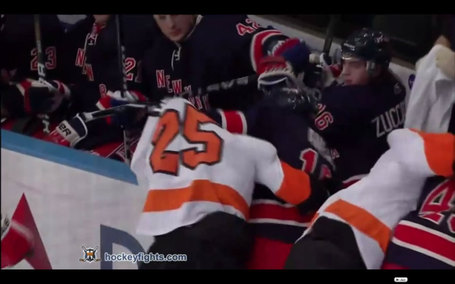 The video cuts away, so it's not exactly clear how Carle gets out of this position, but the next time we see him and Avery, they both have the gloves dropped and they're about to square off. I guess Carle figures that Avery's already thrown some punches, he might as well make an attempt to throw some back. 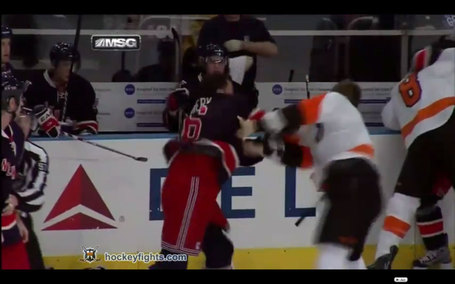 Avery's not done, though. He decides that Carle hasn't had enough, so he throws three punches while the Flyer is down. Sean Avery is a douche, but we all knew this anyway. 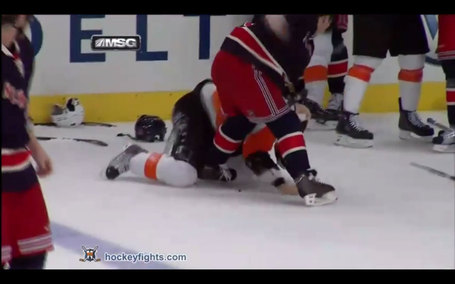 The sad part is that he didn't have to pay for it last night, although Shelley pointed out that fighting him would've been the wrong move since the game was still in doubt. Newbury at least got his from Walker, although a nice swift punch in the face would've been good for him too. Mark down February 20, though. That's the next time the Flyers and Rangers face off. It'll be at MSG, and it's a Sunday afternoon NBC game.