Chris Therien wasn't my favorite Flyer when he was on the team (to say the least), but to say I love the guy as the Flyers radio color analyst would be a severe understatement. He's not the most polished voice on the radio, but his analysis is fantastic (admittedly, I don't listen to radio broadcasts often, but he's been very good in the times I have) and he never shies away from speaking his mind.

Man, did he do that on Tuesday night during the game against the Capitals. Immediately following the Flyers' second goal of the game -- the one where Claude Giroux slipped through a snoozing Caps' defense to get two point blank cracks at the net -- Therien went on this rant, transcribed by D.C. Sports Bog:

"I'll tell you one thing, when you watch the Washington Capitals on that sequence, that was the five laziest guys you could have found to have on the ice against that line. They were circling, there's no stopping and starting. And for Claude Giroux to go in between three guys that just didn't have their heads on a swivel -- no compete level at all -- guys in this league will make plays night after night when you have an opportunity like that. That is absolutely pathetic by the Capitals, and credit Philadelphia for taking advantage of it."

At the end of the second period, he kept going. Again, courtesy of the Bog:

Washington right now is just helping the Flyers' cause. I mean, Philadelphia has not razzled and dazzled this hockey game, but Washington has just not shown up tonight. There's no spark, there's no buzz about them. They have nothing going on at all....I don't care who you're missing, you can't compete like this. There are far less talented teams that will give you a better fight than this....The guys that are in should know better, to come out and compete harder than this. It makes no sense at all....I don't know what to expect from Washington. As a hockey player, you're supposed to have pride. They looked like they had nothing to give those first two periods.

Chris Therien is awesome, but there is a certain irony in a rant about laziness coming from a guy who claims he majored in "partying, keg stands and beer pong" at Providence College, right? 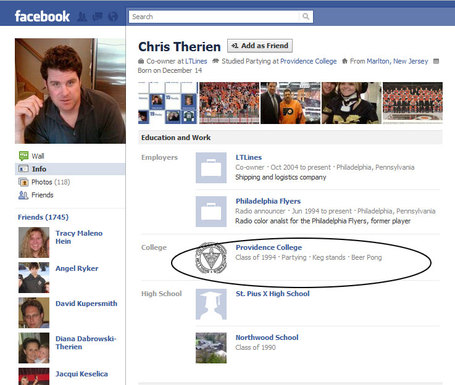 We kid, Chris. You're awesome.