Ian Laperriere, still on LTIR with your Philadelphia Flyers, will be a participant in Luc Robitaille's Celebrity Shootout tomorrow afternoon in Park City, Utah. He's listed as an NHL Alum on the roster, which you can see here: 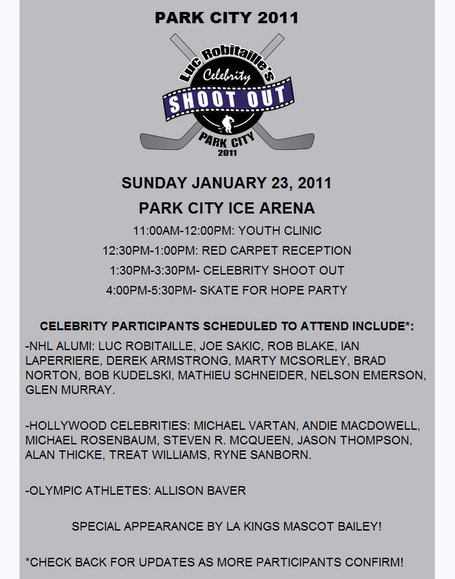 A description of the event:

Sunday January 23, 2011 12:30pm-5:30pm Join us at Park City Ice Arena for a red carpet VIP arrival followed by a Celebrity Hockey game. NHL Alumni and Hollywood Stars will face off in a charity hockey game you won't want to miss! Your ticket also includes admission to our post-game party on the ice and throughout the arena!

The word alumni means a former member of an organization, of course. Yet Laperriere is still a member of the Flyers, collecting his pay check and, according to him, hoping to at least attempt a comeback. Does his participation in this alumni game say anything about his health?

In my eyes, this could mean two very different things.

One, it could mean that yes, Laperriere's NHL career is over and he's just going to take part in a charity game for a good cause. Then again, the Flyers want him to stay on LTIR as opposed to retiring for salary cap reasons, so he'll likely not officially retire until his contract is up, much like Mike Rathje did last year. I wonder if his participation in such a game jeopardizes his LTIR status, since he's only allowed

On the other hand, could this mean that Lappy's condition is improving?

Here's what he told CSN's Tim Panaccio back in October:

"I really feel it might have had to do with just telling my teammates about what was going on, the stress involved with that. Headaches were part of it. Now that I have done it and I'm not around the lights with everything moving quick, I think that was causing my headaches."

Granted, it's just a charity game, but could his participation mean that he's well enough to be around those lights again in an up-tempo hockey game without headaches? That would seem to be a great step for Lappy, whether it's a step on the road to an NHL return or just a step on the road of life.