While it appeared the Flyers controlled most of the play through the first two periods, the Devils actually led in scoring chances 12-9. However, the third period was entirely Flyers as they outchanced the Devils 6-0, and continued their third period dominance from the Bruins game.

Both powerplays were poor, the Flyers only getting five chances on their eight powerplays, although you could argue the Simmonds goal was set up on the powerplay. The Devils managed three from their five powerplays (all in the first period over 26 seconds). Additionally, the Flyers got two short handed chances through breakaways to Nodl and Couturier.

Check out In Lou We Trust for a Devils take on the games chances.

Head to Head (even strength) chances 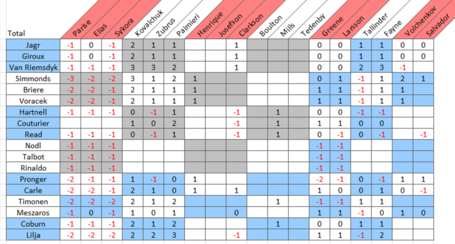 The Parise-Elias-Sykora line was able to outchance nearly every single Flyer, except for Giroux, Jagr and Meszaros who came out even and Couturier who was not on the ice for a chance against the Devils top line. Where the Flyers were able to gain some dominance though was against the Kovalchuk line, who suffered against the top three Flyers line and every defensive pairing.

The chances tell a very different story to the lopsided 3-0 scoreline and in future Devils games the Parise-Elias combination will be one to watch out for.