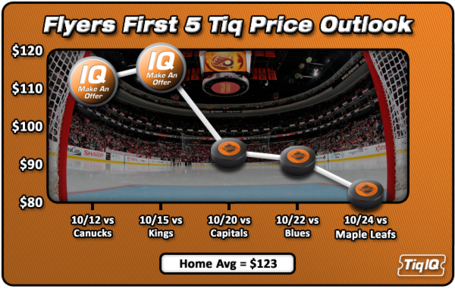 You've likely noticed that individual game tickets on the Philadelphia Flyers website are ridiculously priced for the coming season, upwards of $81 for the last row of the upper bowl (!). Well, it's time for a new season, and as a friendly reminder, you can get tickets to the game right here at Broad Street Hockey.

Through us, you won't pay that absurd price. Not all tickets are priced at that extreme at value through the team, when you consider season ticket holders and partial plans and special email offers that are sold much cheaper. In fact, that means most tickets are sold considerably cheaper than what you see listed for individual games.

But if you're not signed up for a Flyers email list or you're not able or willing to plop down the money for a season plan, you're basically screwed when it comes to getting tickets. Go look at the Flyers website. Individual game tickets are... expensive, to say the least.

For tomorrow night, we have a special Make An Offer promotion running. It's only going for the next couple hours -- through 7:30 p.m. tonight -- but you basically have the ability to name your own price on tickets. For full details, click the button on the left.

Our partners at TiqIQ recommend making an offer of $55 per ticket on the "1-star" deals. Again, this offer expires in just a few hours at 7:30 p.m. ET, so make sure you act quick. You can also still find great deals in a more traditional way for tomorrow's home opener on our ticket page.

We're also doing the Make An Offer promotion for Saturday's game against the Kings, complete with the whole Mike Richards Thing. That promotion doesn't expire until Friday, but the sooner you act the better chance you have at landing a great deal. Click this link to access the Make An Offer promo page for Saturday. TiqIQ recommends an offer of $83 for those listed as "3-star" deals.

And yes, for every other game this season, we have plenty of tickets available here on the site. See that Tickets button at the top of the page? Yeah, it's always there. Click it. Buy tickets. Go Flyers.