We talked a bit the other night about our partners at TiqIQ, and you can get tickets to any Philadelphia Flyers game right here at Broad Street Hockey thanks to that partnership. See that Tickets link on that orange bar up there? Yeah, it's always there, and I can tell you from experience that the deals are pretty great.

So that's awesome. Even more awesome is the chance to win FREE tickets, and that's what we have here today in a contest that's running across SB Nation's hockey network. 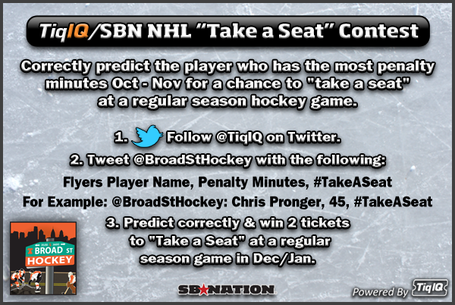