How will the crowd react to Mike Richards tonight?

Share All sharing options for: How will the crowd react to Mike Richards tonight?

We took part in a roundtable discussion over at Puck Daddy today, and you can probably guess the topic. Mike Richards. Mike Richards. More Mike Richards. The former Captain and still-awesome Mike will be on the Wells Fargo Center ice this evening in a different jersey,

I know that, for the most part, BSH readership appreciates what Richards did on the ice as a Flyer, and for the most part, I think the community consensus is that he got a pretty bad deal from the mainstream media in this town. But I'm worried that the greater fan base doesn't feel the same way.

They see Richards comments over the last few days, where he basically said he didn't enjoy coming to the rink as a Flyer over the last two years, and they look at the team on the ice now that's a perfect 3-0-0 to start the season and they believe that Richards was bringing this team down more than he was helping them. They believe that his drinking and partying was a legitimate issue inside the locker room and, worse, on the ice.

My real concern is that the reaction when Richards steps on the ice tonight is going to be mixed. He'll definitely get a good number of cheers, but I'm afraid the boos are going to be nice and heavy as well. I'm not sure if they'll have a video for him like they did for Simon Gagne a year ago, but in my mind, these signs point to no:

- They poorly Photoshopped a C on pictures of Chris Pronger from last year at the Wells Fargo Center. Seems odd to me, like they're trying to completely ignore the time when Richards was captain and Pronger was not. I can't imagine they would have done the same thing during the transfer of power from say, Eric Desjardins to Keith Primeau.

- The whole theme this year is "It's All About The Chemistry." That's the theme of the in-house video shown before home games, complete with a periodic table background and everything. If that's not a slap in the face to the players who were traded away from this team over the summer -- Richards included -- I don't know what is.

- It's hard for me to believe that the Flyers will show any outward, public appreciation towards Richards when they can't even seem to acknowledge his existence on the front page of their website today, either. Jump for images. 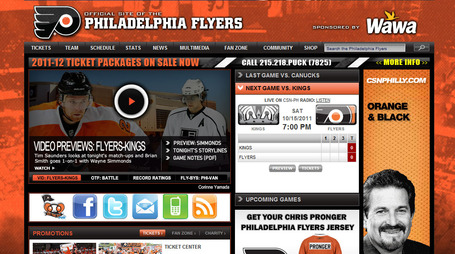 It seems a little awkward to me. Yeah, there's some words about him inside of an article, but even there it's not much. The most damning part is the "It's All About The Chemistry" theme the team has gone with, but I don't know. Maybe I'm overreacting. Maybe I'm silly to think the crowd won't give him a standing ovation tonight. Maybe I'm silly to think the organization won't honor him with a video and a public thank you.

Who knows. I just have a strange feeling that this evening is going to be extremely awkward. How about you? It's not a question of would you cheer for Mike Richards tonight, but of how you expect the crowd to react.