Ladies and gentlemen, you might just be looking at the Philadelphia Flyers Winter Classic jerseys. According to a Philly Sports Daily report, these are the jerseys that will be worn by the Flyers at the game on January 2 against the New York Rangers at Citizens Bank Park. 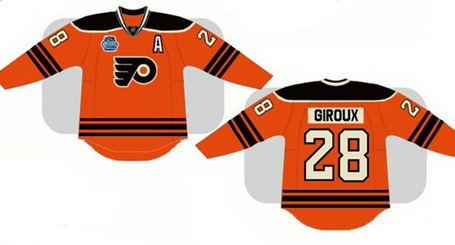 The report says that they were created by DC Visual Arts, and that several Flyers sources have confirmed their legitimacy. Via PSD:

The image first appeared on message boards at the end of September, before Chris Pronger was announced as the team's captain and Kimmo Timonen and Danny Briere were announced as the assistants. That explains why Claude Giroux has the "A" on his jersey. Because it had been so long since they saw it, the sources were not able to 100-percent confirm that this is the actual design, but they indicated that these threads are likely to be what will be announced as the official jerseys.

DC Visual Arts is the company that came up with the design.

We'd be a little skeptical only because they were designed by DC Visual Arts, the company that also put together that concept based on the old Philadelphia Quakers jerseys.

You know, the concept that several mainstream media organizations picked up on and said "HEY! LOOK! WINTER CLASSIC JERSEYS! RUMOR!" before realizing it was just some bro on the Internet playing around with Photoshop. It was a "rumor" just as much as that time @93inOrange wrote on Twitter that the Flyers traded Scott Hartnell to Nashville for Sergei Kostitsyn was an actual trade.

It got to the point where those jerseys were actually made by an Asian company, and now you can see them all over the Wells Fargo Center during home games. Seriously. All. Over. The. Place.

So that's the question I have: Why would DC Visual Arts, which as far as we can tell is just the name some guy with the initials D.C. plops on his work, be asked by the Flyers and the NHL to create the real life Winter Classic jerseys? I suppose it's possible, especially after those Quakers concepts ran wild on the Internet and people clearly took to them. But still, it doesn't seem all that likely.

That said, there's no reason not to believe PSD's sources. Can't remember a time they've steered us wrong in the past.