The final scoring chances for the Canucks vs.Flyers game reflected the even contest between these two teams, with the chance total ending at 17-17. The Flyers managed eight chances in the first period, largely due to spending a lot of time on the powerplay where they generated six chances. The second and third periods featured a lot less powerplay time for the Flyers and only nine more chances for. The Canucks managed 11 more, including four on the powerplay in the third period when the Flyers continued to take penalties and risk having the Canucks tie the game.

At even strength the Flyers were outchanced 9-10. Best performers were James Van Riemsdyk, Jaromir Jagr and Chris Pronger, who all finished +3. Wayne Simmonds, Andrej Meszaros and Andreas Lilja were worst performers, finishing -3. Head to head, the Flyers first line and top defensive pairing was very good, beating the dangerous Sedin a line. Surprisingly, the Canucks fourth line appeared to be their best, getting chances against the Flyers top three forward lines. For the Canucks defense, their top pairing of Hamhuis and Bieska was downright terrible allowing far more chances than either other defensive pair.

Against the Kings, the Flyers dominated the opening period chances 9-2. The Kings first chance came on the powerplay with 10:05 remaining and their final chance of the period was at 8:31, although it was Justin Williams first goal. Each team totalled eight chances through the second and third period, and the Flyers ended regulation with a 17-10 lead in the chances including 13-5 at even strength. The Kings generated three powerplay chances in overtime, including the game-winning goal.

The even-strength dominance by the Flyers was backed by Scott Hartnell and Sean Couturier both managing +4, Matt Read and Wayne Simmonds were both +3. On defense, Meszaros was an excellent +5 (5-0) and Kimmo Timonen was +4. Head to head, every line and defensive pairing was overall positive, especially against the Kings first line of Gagne-Kopitar-Williams. Despite all the even-strength control, the Flyers still lost  due to Kings goaltender Jonathon Quick and poorly timed penalties.

Jump for charts and tables from both games. 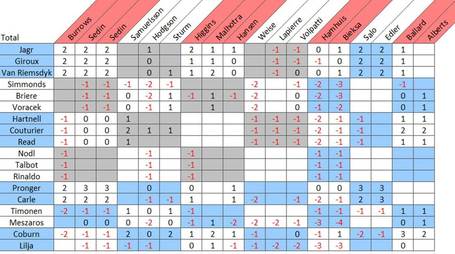