Paul Holmgren addressed the media following tonight's 4-2 Flyers win over the Leafs, and the topic had nothing to do with the win. Instead, it was a big loss that caught the general manager's attention -- a terrifying eye injury to defenseman Chris Pronger.

You can see the play after the jump, but it's not one for the faint of heart. Gloves thrown, hands to the face, running off the ice with audible screams of pain. Horribly scary. And Pronger was indeed scared by it, too, so much to the point where when he returns to the lineup, he'll be wearing a visor.

As for when he can return, Holmgren said that Pronger will be on strict bed rest over the next four days as he consistently meets with the team's eye doctor.

"We think after that time that he'll be out of, we don't want to say danger, but if everything goes ok and if the swelling goes down, he should start on some kind of an exercise program shortly after that," Holmgren said. "We're hoping he'll be able to rejoin the team within ten days to two weeks. And skating-wise, not necessarily playing wise."

"The prognosis is that he was hit on the side here and there's a lot of swelling around his eye and the hope is that the blood doesn't build up there and create issues. That's why he's going to be on bed rest here for the next four days."

Video of the injury after the jump. Again, not for the queasy.

And pictures. Just before the hit: 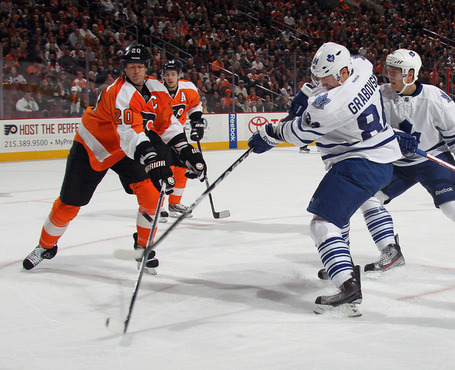 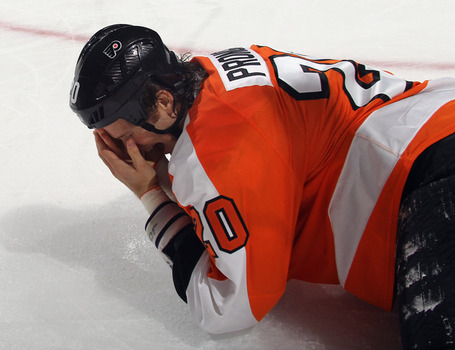