Geoff is tracking zone entries for us again this year, recording who sends the puck into the zone and whether they carry, pass, or dump it in. Previously, we took our first look at this year's data and pointed out which players were making the most individual contributions with the puck.

In this update, we take a look at more team-based assessments. Like in past articles, this will involve looking at how often and decisively the Flyers win the neutral zone battle at 5-on-5, how many shots they generate per entry into the offensive zone, and how many shots they allow per entry by their opponents.

The zone entry data thus allows us to separate out the team's offensive zone, neutral zone, and defensive zone results.

There are four possible outcomes for a team when the puck is in the neutral zone:

A team's primary goal in neutral zone play is to push the puck forwards into the opponent's zone -- to get more entries for than against, more wins than losses. The secondary goal is to keep control of the puck as they enter the zone (making the chances for more dangerous) while forcing the other team to dump the puck at the other end (making the chances against less dangerous).

The Flyers as a team have been successful in the neutral zone. They have won somewhat more than their share of the neutral zone battles, getting 51.2% of all zone entries. Moreover, their neutral zone wins tend to be more decisive -- they have been able to retain control of the puck on 56.5% of their entries, while limiting their opponent to 51.2% controlled entries.

The combined effect is a modest but clear edge to the Flyers in neutral zone play at 5-on-5: 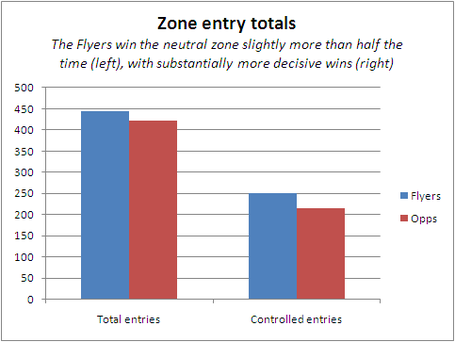 Overall, the Flyers have won just a little over half the neutral zone battles, but with a lot more knockouts than their opponents.

Once the puck is sent into the zone, the aim of the offense is to generate shots and scoring chances. A team that is effective in the offensive zone will tend to generate more shots per zone entry. We can separate the question of how decisively they win the neutral zone from how effectively they navigate the offensive zone by asking two separate questions: how many shots do they generate per controlled entry (decisive win of the neutral zone), and how many shots do they generate per uncontrolled entry (dump and chase)?

Although the Flyers have been able to carry the puck in more often than their opponents, they have not been appreciably more effective in the offensive end after carrying it in. They have generated 0.51 shot attempts (including missed shots) per controlled entry, exactly the same number as their opponents get when they bring it into the Flyers' zone.

The Flyers have been a little less effective than their opponents on dump-and-chase plays, generating 0.20 shots per uncontrolled entry while allowing 0.24 shots against.

So overall, the Flyers have outplayed their opponents in the neutral zone, but have been slightly outplayed in the attack zones.

With about 200 zone entries per game, the sample size builds pretty quickly, even faster than Corsi. Getting 51.2% of all zone entries over seven games is not strong enough to say with confidence that the team is truly above average, but it's enough to say their long-run talent is probably somewhere between 49 and 53%. In other words, we can just start to make tentative predictions at this point, but the picture may still change as the season wears on.

We have previously seen that score effects can play a significant role, so it is useful to look at just the zone entries in situations where the score is close. Thus far, the Flyers have spent similar amounts of time leading and trailing, so there is no strong score effect on the overall totals, although the results in individual games vary strongly with the results of the game. In the plot below, you can see that the team has pretty consistently had a small edge when the score was close (blue curve), but with the overall totals getting lopsided in blowouts (red curve). 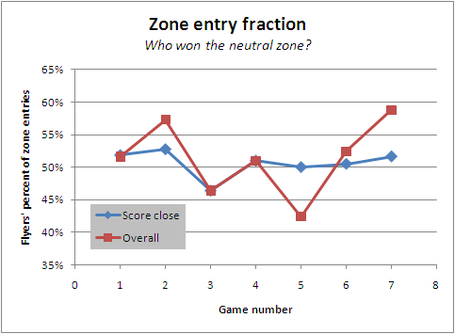 Zone entry data suggest the Flyers have a modest but clear edge in neutral zone play -- both overall and in close games. The attack zone play has gone very slightly in their opponents' favor, but the difference is much smaller there than in the neutral zone. Combine a modest edge from the skaters with strong goaltending and one would suspect that this team is on track for a good-but-not-great season.