Ridiculous. Keeping in mind that I only count a scoring chance as a bonafide shot from within a designated area, the Jets at one stage had 1 goal and 0 scoring chances. By the end of the second, the Jets had a total of 8 scoring chances and 6 goals, though the Randy Jones and Tanner Glass goals did not count as chances. The Flyers meanwhile were only converting on 21% of their chances (3 goals from 14), plus the goal off Maxime Talbot's leg. The third period featured a run of 5 goals from 5 chances, and a total of 7 goals from 10 chances. The Flyers outchanced the Jets 20-12, including 14-8 at even strength, but a collection of bad defence, bad goaltending and lucky bounces meant the Jets won the game.

Head to head, the top three forward lines outchanced most of the Jets lineup, but the Shelley-Talbot-Rinaldo line suffered against the Jets top line and the third pairing of Oduya and Jones. On defense, the Timonen-Meszaros pairing were the best, though Carle and Gustafsson were successful against the Ladd-Little-Wellwood line. 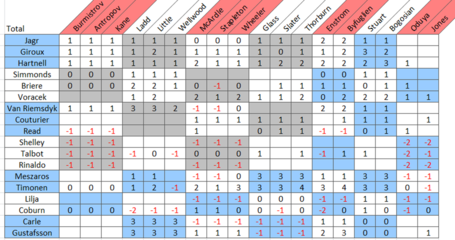