Scoring chances through the first two periods were fairly even between these teams, finishing 13-11 at the end of the second and 11-10 at even strength. The third period was complete dominance by the Flyers, outchancing the Canes 10-3 for the period and 6-2 at even strength. The powerplay only generated 2 chances from 4 opportunities, but the penalty kill was impressive, outchancing the Hurricanes powerplay 3-2.

The first line of Hartnell-Giroux-Jagr put up all the points at even strength and dominated the chances against nearly all the matchups they faced, especially the Canes fourth line. JVR-Read-Voracek and Simmonds-Couturier-Nodl were mostly positive, but we should hope to see more out of them in future games as Giroux's line can't be expected to carry the offense every game. On defense, Carle and Timonen once again stood out getting positive chances against most opponents. The Hurricanes defensive pairing of Harrison-Kaberle was impressive, they weren't dominated by Hartnell-Giroux-Jagr and managed to get chances against most of the Flyers lineup, especially the Read line.

For the Hurricanes perspective, head to ShutdownLine 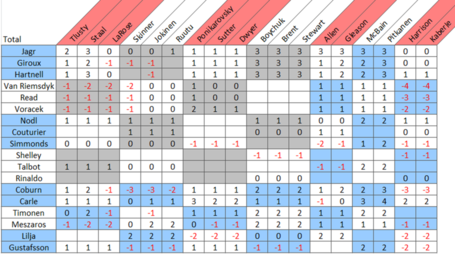