As I've written elsewhere, one of my major concerns for this off-season has been where the defensive minutes will come from.

The Flyers shipped off two forwards in Mike Richards and Jeff Carter who were consistently among the team leaders in tough minutes played. In return, they got one guy (Wayne Simmonds) who plays tough minutes and one (Jakub Voracek) who doesn't.

Of course, they also got two young prospects. If Brayden Schenn and Sean Couturier can shoulder some of the load Richards and Carter used to take on, it will make their loss (and the loss of defensive stalwarts Blair Betts and Darroll Powe) easier to bear.

How likely is that? Find out after the jump.

Of course, it's hard to keep track of exactly where everyone starts and who they face over the course of a game, much less a season. So we look to the box scores to keep a tally; the NHL shift charts and play by play show us who was put out for the defensive zone draws and who faced the top competition. Going through those records lets us tally up two metrics that I use a lot to assess usage:

Zone start percentages give us a measure of whether a player gets used more in the offensive or defensive zone. The average player is near 50%.

There are a few different competition metrics; the one I use most is Corsi Rel QoC, which assesses a player's competition based on whether the line he faces tends to get off more shots for and prevent shots against better than the other lines on that team. The average player has a score near 0.4, with higher numbers indicating tougher competition.

So to get a sense for how likely it is that Couturier or Schenn will be ready for tough minutes, I'm going to look at how many 18-20 year old forwards had above-average defensive zone starts and faced above-average competition over the last four years. And I'll compare that result to a group of forwards of all ages.

The result is this chart, which has a dot for each player, with dots in the top-right of the chart indicating a player who took on tough shifts and dots in the bottom-left quadrant for players who were sheltered. 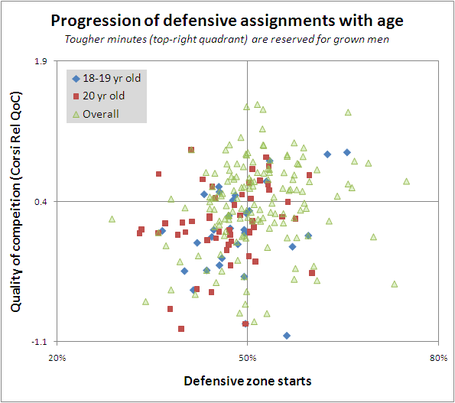 There's a lot to see there, but focus on how many red and blue dots (young players) are in the top right versus bottom left, and I think you'll see that it's pretty obvious that very few players take on tough minutes before they turn 20. In case it's not obvious to you that the younger players tend to be quite sheltered, here's a tabulation of how many people are in the top-right (defensive) quadrant versus bottom left (sheltered): 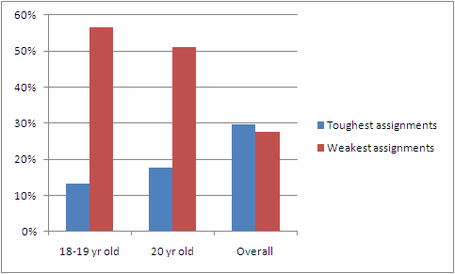 Just 13% of the 18 and 19 year olds take on tough assignments. It's not impossible, and the player Couturier was most often compared to in draft profiles -- Jordan Staal -- was one of them. But Jonathan Toews was also an elite two-way forward prospect and was a Selke nominee last year, yet in his rookie year he was heavily sheltered (44% defensive zone starts, Corsi Rel QoC of 0.02).

The first game looked promising for Couturier last night. He was given four defensive zone starts and one offensive zone start, and while he made one mistake that led to an open shot ringing off the post, he also broke up several plays and generally acquitted himself well in the defensive end.

So while there is hope that Couturier, and perhaps Schenn, will follow in Staal's footsteps, we should remember that it is rare that even a defensively talented forward is ready for that role at such a young age. I am nervous about constructing a roster that relies on an 18 year old being put in those spots, but it will be very exciting if Couturier can continue his promising start.