Many of you who were around Broad Street Hockey at the end of last season may remember that I started tracking the Flyers scoring chances, and I will continue to do so this season.

For those of you who haven't read about the scoring chance project undertaken by members in the hockey blogosphere, or for those who would like a refresher, I suggest reading the following links:

- An intro to scoring chances by C.J Richey at In Lou We Trust covers the basic premise of the scoring chance project and how to interpret the charts.

- Scoring chances, microstats and why they matter by Derek Zona demonstrates the use of advanced statistics by hockey teams for many years and why we as fans should care about using them.

Also, I wrote a summary of the few games I did track at the end of last season, which shows what you can do with several games worth of scoring chance data (as well as small sample size effects!).

Briefly though, a scoring chance is defined as a clear play directed toward the opposing net from a dangerous scoring area -- loosely defined as the top of the circle in and inside the faceoff dots, though sometimes slightly more generous than that depending on the amount of immediately-preceding puck movement or screens in front of the net.

After the jump you'll see the area I use to define a scoring chance, data from Game 1 against the Bruins and an explanation of the charts.

This is the guide used to determine whether a shot is a scoring chance or not. Shots that occur on the border of the area can be difficult to call, but I am typically a more generous recorder than others.

The results are presented in three charts.

The first chart: Team-Period-Time-Comments are noted for each scoring chance as it takes place while watching the game. Then PHI-Opponent-Strength are derived using Vic’s script. It searches through NHL.com play-by-play information for the time and lists the players present on the ice as well as whether the play was at even-strength or not.

The second chart: The script compiles all the data from the first chart, and sorts it by player number. This presents the total chances for and against for a player at even strength and on the powerplay or penalty kill.

The third chart:The script sums the totals for each team by period, and shows them all from the Flyers perspective. The same rules apply for PP/SH, for/against applies to when the Flyers are on the PP or are SH. They do not indicate Flyers’ PP chances and Opponent’s PP chances side by side.

Below is the output from regular season game one, against the Bruins, and is typical of what these scoring chance posts will be. 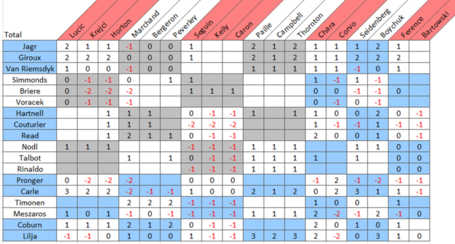 As far as scoring chances go, this was a pretty good game for the new look Flyers against a team largely unchanged Bruins team that won the Stanley Cup. The even strength battle is always key and the Flyers effort in the second to keep the Bruins to two chances while generating seven of their own and protecting a single goal lead is impressive. Improvements could be made on special teams where they only managed three chances on four powerplays and allowed six Bruins chances on five penalty kills.

An 18-15 final chance is a vast improvement over the playoff series against the Bruins, let's all hope this is an indication of the season to come.