In the interest of catching up, the chance data for the Sabres, Devils, Blue Jackets, Lightning, Panthers and Hurricanes games can be found in the BSH archives or the Scoring Chances section without analysis.

The Flyers more than doubled the Coyotes in scoring chances for this game, finishing 18-8 in total and ahead 10-7 at even-strength. The 4 chances the Coyotes managed through the first two periods is the lowest of any opponent all season (Columbus was the previous low with 5 through two periods). The Flyers special teams were excellent; despite not scoring the powerplay generated 6 chances from their three oppurtunities and the penalty kill kept the Coyotes powerplay chanceless and got 2 chances of their own.

The Read-Talbot-Voracek line was the best for the Flyers at even-strength, with positive chances against the entire Coyotes lineup. The JVR-Briere-Simmonds were the opposite, finishing with negative chances against most of the Coyotes. This line hasn't been very good since it was first put together in Game 14 versus the Blue Jackets, it very rarely outchances the opposition. Peter Laviolette is known to pay attention to scoring chances so I wouldn't be surprised to see this line changed, especially now with Jagr out (I haven't watched the Jets game yet but I understand the lines were all over the place). 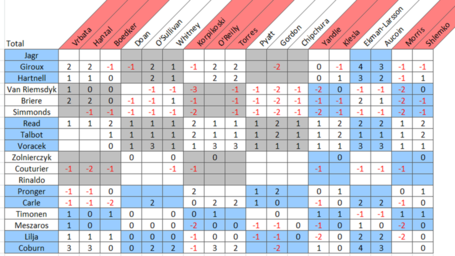