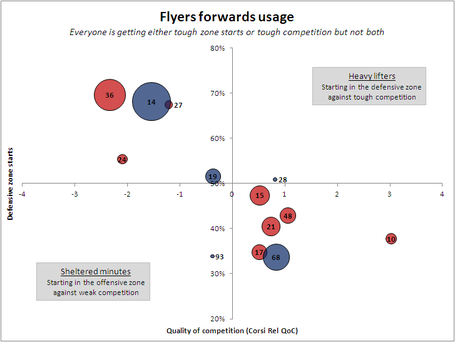 In years past, the Flyers have divided usage pretty strictly based on defensive skill. Forwards like Mike Richards, Jeff Carter, and Andreas Nodl consistently saw really tough minutes, where they were asked to start in their own end against top competition. That allowed players like Ville Leino, Daniel Briere, and Scott Hartnell to feast on premium scoring opportunities, starting in the offensive zone against middling competition.

Apparently influenced by the Occupy Wall Street movement (or perhaps by the reality that they no longer have premium two-way forwards on the roster), the Flyers have decided they are no longer going to let a few players profit from the hard work of their teammates.

As the graph above shows, everyone is either facing tough competition or starting in their own end a lot, but not both. Jakub Voracek has been slightly sheltered, and Claude Giroux has gotten slightly tougher assignments, but there is not the clear dichotomy between defensive line and offensive line that there was in years past.

The downside of this year's relatively balanced lines and usage is that players don't get deployed in the situations where their talents can have the most impact. The upside is that the balanced lines can play in any situation, so there is no longer a risk of getting caught in bad matchups like in last year's playoffs. It will be interesting to see how this plays out -- perhaps as the young players mature, the Flyers will find a group that they trust in those defensive situations and switch from trying to avoid bad matchups to trying to seek out good ones.