Geoff has been slavishly tracking zone entries for us, recording who sends the puck into the zone and how (carried in, dumped in, etc). I then pull the results of each entry from the NHL play by play and tabulate the results.

We looked at the numbers really early in the year (you can find all of our zone entry articles here), but haven't updated in a while. With a quarter-season of data logged, we can probably draw some pretty reasonable conclusions from the data, so let's take a look after the jump.

One of my favorite things about the zone entry data is that it lets us separate out the team's play in each of the three zones. Let's start by looking at how often the Flyers win the neutral zone (all data is for 5v5).

Teams of equal skill would be expected to have about the same number of zone entries -- each time the puck went to the neutral zone, it would be equally likely that the next zone entry would be at one end or the other. So far this year, the Flyers are getting 51.2% of the zone entries, so they are winning more than their share of neutral zone battles.

That number is strongly influenced by score effects, as teams with a big lead go into a defensive shell and don't press the neutral zone as hard. We can correct for this by focusing on just the results in close games (tied at any time, or within one goal in the first or second period), but we get a similar result in this case: the Flyers have won the neutral zone 51.7% of the time when the game is close.

The Flyers definitely win the neutral zone more than their opponents, but do they do it more decisively? Carrying the puck into the opponent's zone creates a lot more scoring chances than dumping it in, so looking at how often a team is able to control the puck across the line is also useful.

The Flyers have been roughly neutral this year in shot differential (Corsi or Fenwick), and the zone entry data shows us that this is because they are substantially outplaying their opponent in the neutral zone but giving that advantage away in the attack zones.

One stat that stands out as a clear indicator of an individual forward's skill is the percent of his zone entries that are with control -- how often does the player carry or pass the puck in rather than dump or deflect it in?

Wait, what? What is Rinaldo doing up there? It might just be variance, since he hasn't played enough to rack up a large entry total yet, but it's true that he's an aggressive player and perhaps this is a place where his active play helps the team.

At the other end of the spectrum, Jody Shelley retains control of the puck upon entering the neutral zone just 27% of the time, or about once every three games. Harry Zolnierczyk is next-lowest at 48%, followed by Sean Couturier at 51%. Couturier concerns me a little; it's possible that he's just dumping the puck in because that's part of his fourth line role, but it's also possible that this is an indication that he doesn't have the dynamic playmaker abilities of the Flyers' top forwards.

OK, that's more than a little unfair, I suppose. It may be that learning how to gain the zone against an NHL defense is a natural part of a prospect's growth and that we shouldn't expect it of an 18-year-old. And he could be a great player even without the puck-handling skills of Jagr, Briere, or Giroux.

Yet still, I can't help but wonder if this is part of why the team can't find a way to get him into the top 9. His controlled entries have been the most successful on the team (0.68 shots per entry), but that seems to be because he is reluctant to press smaller advantages -- something the team would need him to do in a scoring role.

Some other assorted odds and ends:

By looking at who is on the ice for each zone entry for or against, we can look at individual impact beyond the puck-handling tabulated in the individual zone entries. A player's off-puck contributions will show up in a tabulation of how the team does with that player on the ice. A player who is strong defensively or good on the forecheck might help limit the entries against, while someone who makes good decisions and passes might help create more entries for. 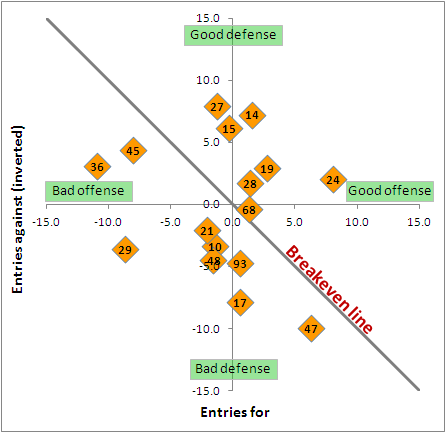 This chart shows how the team's zone entry rates change with a given player on the ice. For example, when Matt Read is on the ice, the Flyers get an extra 8.1 entries per 60 compared to their average rate, and their opponent's rate drops by 2.1 entries per 60. Read has achieved his team-best 54.1% neutral zone winning percentage mostly as a result of his offensive contributions, though he has been a positive defensive player as well.

In comparison, the team's second-highest winning percentage -- Couturier's 53.9% -- was also helped at both ends but was achieved primarily through defensive accomplishment. The team gets an extra 1.6 entries per 60 with Couturier on the ice, but his results are primarily driven by suppressing the opponent's rate by 7.2 entries per 60.

Rinaldo helps the team out defensively, but not nearly as much as he hurts them offensively. The team's zone entry rate drops by 10.9 entries per 60 when he steps on the ice, and they win just 48.6% of the neutral zone battles as a result.

I expressed some concern earlier about Couturier's hesitance to carry the puck into the offensive zone, and that shows up in the team results as well -- he is the only player who is on the ice for more dump-and-chase than controlled zone entries. However, his defensive focus shows up at the other blue line, as he is second on the team at preventing the opponents from carrying the puck in and first at preventing shots from those controlled entries. The net is a clear positive for the team, even if he hasn't yet shown superstar offensive playmaking skills.

The Flyers are winning the neutral zone more often than their opponents, and their extraordinary puck-handlers helping them gain the zone with control. Yet the opponents are generating more shots from their zone entries, making up the difference and leaving the Flyers roughly even in overall shot differential.

Unfortunately, with no other team's fans having reported zone entry data yet (though a couple have tracked it), we don't have a comparison to suggest which attack zone is the problem. However, this chart strongly suggests that the problem was a brief offensive power outage a few weeks ago, when they had 23 shots against New Jersey and 15 against Tampa Bay in rapid succession. 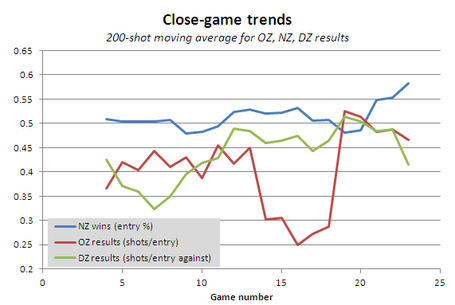 Yes, part of the low shot total was the decision to troll Tampa Bay's neutral zone trap. But the problems ran deeper than that, as those were the two worst games of the year in generating shots per entry as well. Hopefully, whatever they were struggling with then has been resolved; if they can maintain parity in the attack zones, their effectiveness in the neutral zone will make them a strong team.