HBO 24/7 Flyers-Rangers: What You Missed in Episode 1

Share All sharing options for: HBO 24/7 Flyers-Rangers: What You Missed in Episode 1

In an attempt to not spoil it for people, I waited to review the first episode of HBO 24/7 Flyers-Rangers. And waited. And waited. And eventually, everything pretty much got written about already.

But since the second episode comes tonight, I figured I should at least write something before that about some of the things you might not have noticed in the first installment. No Bryz nor Callahan's Grandma here, but rather the diamonds in the deep rough.

Two big things, and then a bunch of little things.

Considering his name recognition among casual hockey fans is probably the highest on either team, Jaromir Jagr didn't really do a whole lot in the first episode of 24/7. But what he did do was stand for an extended period of time in front of a wall covered in the nameplates of Flyers gone by, an incredible Easter egg of Flyer history for anybody who hit pause at that moment. The shot atop this story shows the first moment, with gone-but-not-forgotten Flyer names like "Syvret" and "Duchesne" clearly visible.

More shots of the wall after the jump. 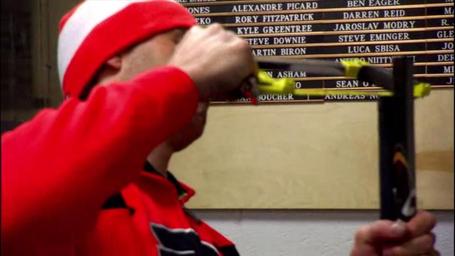 You can never clearly see the top of the wall in any of the shots, but this thing clearly goes back pretty far. And you can see how haphazardly and recently "ANDREAS NODL" was shoved in there.

The crazy thing about this wall is that it's a complete equalizer. Jeff Carter and Mike Richards are thrown up there with the same amount of focus as Nate Guenin and Nick Boynton. A nameplate is a nameplate. 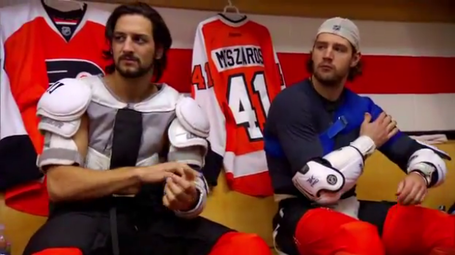 Did you know Kevin Marshall was Quebecois? I didn't, until I was told recently. His name sounds about as WASPy as possible, and having never heard him speak, he stayed completely off my poutine-dar. But yet there he was, French as could be on premium cable. KMQuarante-Six is so French that he could only be played in the eventual film adaptation of 24/7 by Gerard Depardieu. And it will be a starring role for Depardieu, sans doute. The camera loved him throughout the episode, earning him more time on screen than JVR and Kimmo Timonen combined.

The real highlight of Marshall's episode came in the popular Mac Miller scene, in which he danced and techtoniked up a storm in his very French way.

What a star. That kind of exuberance from the guy at the very bottom of this team's roster -- and now, off the roster -- is something to be wildly applauded.

And now, some other assorted thoughts on the episode.

Will the cameras go with Pronger to Pittsburgh? Or do we at least see him talking to Laviolette or Holmgren, or maybe showing visible symptoms of his condition?

Do we see Giroux getting visibly better as the episode progresses?

Did FMAB:BAMF ever find that bus?

Tune in tonight to find out all that and more. We'll have a discussion thread going, which will keep going, chock full of spoilers, all Thursday as well.