Share All sharing options for: HBO 24/7 Flyers vs. Rangers, Episode 2 Recap: A Lot of Kids, A Lot of F-Bombs

Some in-depth, running thoughts on the second episode of HBO 24/7 Flyers vs. Rangers: Road to the NHL Winter Classic. To prevent spoilage, everything is after the break. All 1,700+ words of it.

We start with a "Previously on...", which seems unnecessary to recap. It's nice hearing about Ilya Bryzgalov's thoughts on the humongous big universe again, but hopefully that's the end of that.

New York City first, just like last time. Can you believe athletes live in a big city? Who's ever heard of something so ridiculous! Clearly HBO thinks you haven't.

And just like last time, there's so much to do when you're an athlete in New York City! Why, you put on a scarf that matches your leather jacket and go play guitar with John McEnroe!

I knew this cameo was coming because Lundqvist had tweeted about it, but it was still sort of odd for me to see McEnroe because I'm reading a book about him currently, and it has nothing to do with him playing guitar with a Swedish athlete with impeccable hair. In fact, it has to do with him being tormented by a Swedish athlete with impeccable hair. In other words, McEnroe's recent detente toward Sweden is Nobel prize worthy.

On another note, Lundqvist's eyes are pretty out of control in this HBO lighting that makes everything pop. Combined with Biron's crazy grey eyes, NYR has to have one of the best goalie eye tandems in the league. 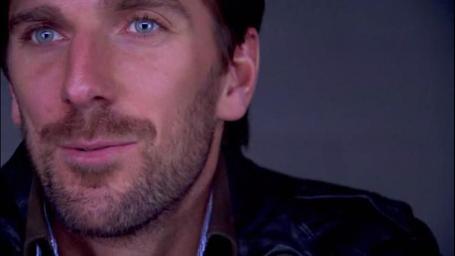 Now we get to spend some time with our first kid of the episode, Landon Girardi. He's doing indoors the stuff I did in my yard when I was his age, but way better. I blame my lack of NHL genes. Lacking a segue or an exit strategy, the narrator makes some statement about how Dan Girardi is timing his exit from his apartment perfectly, and then he leaves.

So after what seems like an eternity, it's Flyer time. They open after the Caps game, which immediately infuriates me. They skipped the Buffalo win completely, and now the Caps blowout as well? Is the Flyers' success not good TV?

As predicted, the next several shots center around various Flyer players and staff locating and boarding the bus after the game. 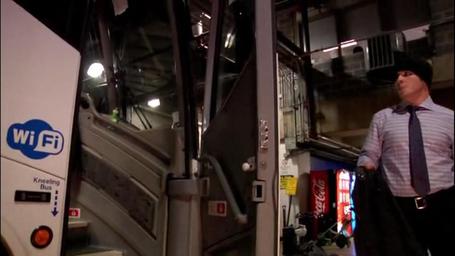 Marc-Andre Bourdon is not shown.

Then there's a flashback to the pre-game speech from Laviolette. But then they're back on the bus towards the airport. But then the Flyers are shown fondly remembering the night's game in another flashback as they board the plane. Come on, HBO. I stopped watching Lost for a reason, I don't need this shit from you guys, too. That said, beating the Caps is always worth seeing. After the game, a very excited Zac Rinaldo shakes Ed Snider's hand, and the two share a moment of complete agreement about what makes a great hockey player. 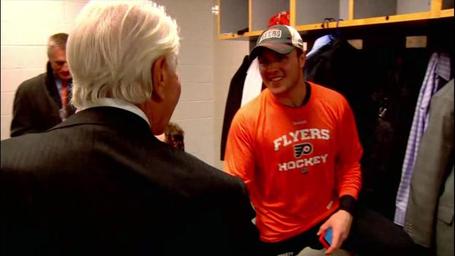 On the plane, my self-taught Cyrillic (someone lost a copy Intermediate Russian at the store where I worked in 2006) tells me that Bryzgalov is reading a book by Tolstoy. Aleksey Tolstoy, to be precise. Like he did before with the universe, Bryz showed me that the Tolstoy family is also bigger than I realized.

The plane lands in Montreal, and we return to the Rangers. My notes for this section say "yawwwwwwwn," so I'm going to skip ahead to the next Flyers segment.

Practice is followed by a peek in on the Zolnierczyk-Rinaldo hotel room. Rinaldo is immediately endearing, channeling the speech patterns of his favorite BSH Radio host and talking about how he used to play as Eric Lindros on Sega. His off-ice demeanor is as far from his on-ice reputation as any player I've ever seen in this league.

And then comes the biggest scene in this episode: the Flyers lunch. Ilya Bryzgalov greets the room with a jaunty, absurd "hey, buon appetito, guys!" and is immediately met with "Hey, Universe!" And from here on in the series, the game has changed. These guys have now seen themselves on TV, seen each other on TV, and have adjusted their behavior accordingly. Honestly, it kind of sucks that we got less than an episode-and-a-half of the guys before they saw each other.

Having seen Bryz's star turn, now they realize how weird he is even more than before, and that he's getting the attention they all yearned for. Bryz says his hotel room didn't have HBO (which is what reporters were saying at the time), but Zolnierczyk says his did. Wait, what? How does one room in the hotel have more channels than another? I'm assuming Zolnierczyk, tech-savvy youth that he is, managed to use his video streaming experience to watch it on a computer, but didn't want to admit to that on camera.

And then he explains to Zolnierczyk that his husky is, basically, a hot girl. I can't explain this or Bob's silence any better than this video can.

There's a scene where Brandon Prust and Brian Boyle are waking up from their naps in various states of undress, and then they dress each other. The Rangers lose to the Blues, and John Tortorella decides that screaming is the best course of action.

Flyers again, now in Montreal. It's amazing how much worse visitors' locker rooms are than the home team's area. It feels like some of these road accommodations must violate the Geneva Convention.

There's a ridiculous non-call when Jagr is tripped. Coburn calmly argues and tries to compromise, and then Laviolette blames the decision on pro-Montreal bias by referee Frederic L'Ecuyer. He calls it "Montreal typical," which is awesomely fannish and paranoid. He then walks straight to the replay monitor before addressing his team, which is an interesting reflection of where his mind is. 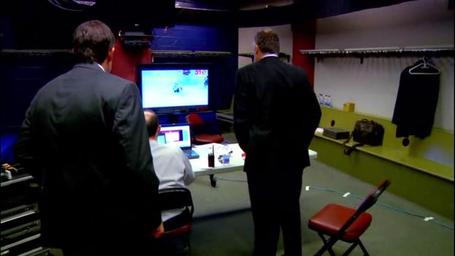 And then the Pronger bombshell goes off. And here, there's really not a whole lot HBO did right, honestly. They let Laviolette's answers to the beat writer's absurdly leading questions stand as the sole document of the event, while melancholy piano tinkles in the background. No teammate reaction to be had, no Pronger reaction to be had. For such a huge, season-changing event, it's really not given much weight at all.

Rangers again. Rupp over Avery. Whatever.

And then Tortorella gets awesome, unexpectedly. He exchanges text messages with Liam Trainer, a 10-year-old with cerebral palsy. And even though you might think that a second Ranger fan in a wheelchair segment in two weeks would be a bit much, it's totally not. The constant contact Tortorella keeps with Liam clearly means a lot to both, and is a tremendous example of somebody going the extra mile when they really don't have to. This kid almost makes me feel like I should be okay with the Rangers winning the occasional game. Almost. 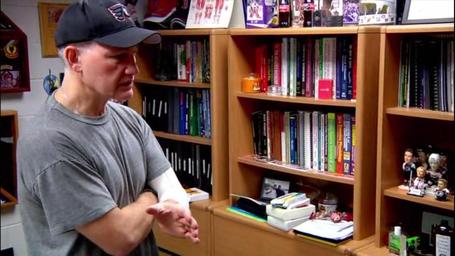 Back to the Flyers. Trainer Jim McCrossin, wearing one sleeve, talks to Giroux about the risks of not waiting to get back on the horse. Then Giroux talks to Matt Carle about the "flavor of the month" while Giroux taps away at his Blackberry. Carle means concussions, apparently, but I completely assumed he was talking about whatever girl Giroux was texting.

Which reminds me of what I think is this show's biggest hole in terms of depicting the life of an NHLer. There has never been a single 24/7 scene (or maybe even a line) dedicated to the fact that the majority of these guys are single millionaires in big cities, who have to beat women away with their sticks. I'm not saying the camera needs to follow every step of this process, but seeing them go out on the town to accomplish something in that department would be a pretty honest thing to include.

Anyway, back to Matt Carle (who is married, by the way). He says he hopes he doesn't get a concussion from Santa this year. I wouldn't worry if I were you, Matt. Anybody who has spent his Alaskan childhood fishing out of planes like you did clearly has already become completely invincible.

Another Bryzgalov confessional, clearly from the same shoot that his universe musings came from. Bryzgalov talks about how getting hit with pucks hurts without proper equipment, and yearns for a life as someone who transfers phone calls in an office. He thinks defensemen are crazier and weirder than he, because they block shots without padding because Craig Berube tells them to. I completely agree, but he's still crazy.

And now an inevitable segment on the Friday night at the Couturiere household, which is the successor to last year's Brioux domicile. 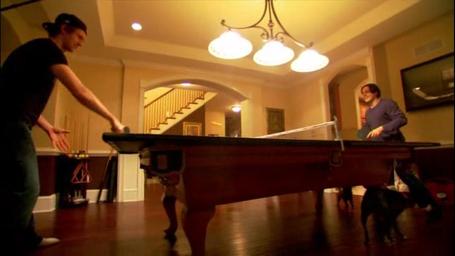 Then Couturier plays video games with Briere's kids while they talk massive trash about beating him and how weirdly big his head is. Couturier is nearly half Briere's age, and is only five years older than Briere's oldest son, Caelan. This seems far more like an adoption than it did with Giroux.

The Rangers play the Coyotes. They win at the buzzer. Liam is happy.

And then a Scott Hartnell segment, the show's first. For someone who was predicted to be one of the stars of the series, Hartnell really has not gotten any significant airtime. And in this segment, he talks about travel interfering with his Christmas tree plans. It was about the least interesting segment of the episode. I'm not sure why Hartnell has fallen so flat, but he really has.

Claude Giroux, decked out in two orange towels, seems to be doing better with his concussion. Not all concussions are created equal.

Then comes the Bruins game, which has some horrible officiating on top of the horrible score and injury to Couturier's head. Couturier is left bloodied on the ice, barely able to hear. Matt Carle is shown no longer believing in Santa.

The team walks back into the locker room. Sean Couturier and Mac Miller are conspicuously absent. Laviolette stays composed and leaderly.

Montage. Claude Giroux smiles and we fade to black.

Hard to accept that this thing is already 50 percent over.