A Graphical Look at Bryzgalov's Struggles

Share All sharing options for: A Graphical Look at Bryzgalov's Struggles

Ilya Bryzgalov is struggling again. Whether you use your eyes, look at the numbers, or ask the players, the conclusion is the same.

So last night Down Goes Spezza asked us to give him "something good regarding" Bryzgalov regressing to the mean. I don't know if what you're about to read fulfills his request, but it's how I spent my night after he asked.

All numbers here are from Hockey-Reference.com, since I find their game logs much easier to use.

First, let's just look at how Ilya Bryzgalov has played, on a game-by-game basis, over the last two-plus seasons. 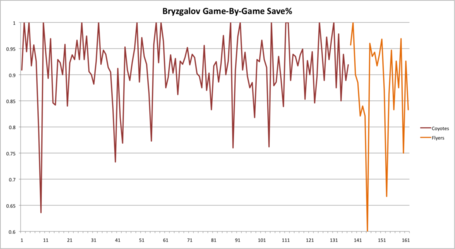 This gives us a baseline for how much his game-by-game performance varies, if nothing else. We see a good number of games dropping below the 85% line, but generally, every game is between 85 and 95%. 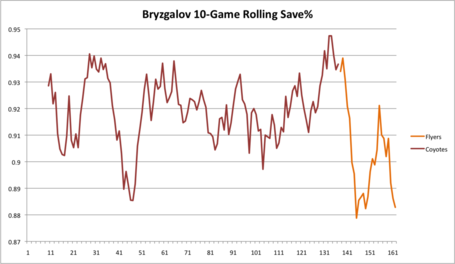 Here we take the cumulative save percentage from Bryzgalov's last ten games. While the immediate drop at the start of his Flyers career is blatantly obvious, it bottomed out after he let in four goals on ten shots against Winnipeg. That marked his fifth straight game stopping fewer than 90 percent of shots. He then rattled off six straight above 91.7 percent.

But we also notice a similar, if more jagged, plummet earlier. In January of 2010, Bryzgalov posted a save percentage of 83.3 or lower in four of five games. The very bottom of that spike came on January 28th, 2010. This has certainly happened before with Bryz: He goes on long cold streaks.

The difference is that in Philadelphia, when he bottomed out after the Winnipeg game, he had another stretch of three straight bad games, preventing him from improving his rolling average.

Since Bryzgalov was pulled against the Islanders in November, he has alternated in-game save percentages of 92 or higher with 87.5 or lower. Combine the three-game skid with the consistently inconsistent play, and you have a double-dip in Bryzgalov's numbers.

This raises two questions though.

To answer the first question, I simply looked at Henrik Lundqvist of the Rangers. Why Lundqvist? He's an elite goalie with similar career save percentage numbers and he's playing on a hated rival. Also, I wanted someone who played roughly as much as Bryzgalov while being on a solid, if unspectacular, team.

Here is what we get:

Yes, it's only one comparison, but it's hard to say Bryzgalov is unique in having two steep drops in performance. it's also hard to say he's more inconsistent than Lundqvist, despite conventional wisdom disagreeing with that.

It is very easy to over-emphasize the short-term results, making them seem bigger than they are. Bryzgalov really is playing poorly, but the long-term trend is clear: Bryzgalov is in line with the NHL's best goalies. We can look for reasons why he's struggling - the expectations of the contract, the pressure of the media, the new teammates, the new city, the new defensive system, the injuries, his confidence - but those are just excuses to fill a narrative.

This is not the way Bryzgalov, Ed Snider, Paul Holmgren, or Flyers fans wanted his nine-year contract to begin. It is understandable that the poor play, magnified by the large contract, creates panic. But with the contract also comes a new perspective: He's going to be here for nine-years, so twenty-six games isn't enough to judge him on.

To answer question two - the likelihood of this happening after Bryzgalov's last two years in Phoenix - we turn to Eric T.:

Statisticians have a simple method for testing whether the difference between two samples is significant, called a t-test. It measures the probability that you could have gotten a difference that large just by random chance, without a true talent difference.

In this case, it comes out at 7%, which is big enough that a statistician would be hesitant to call this a clear difference, but small enough that a fan should be concerned.

Yes, Ilya Bryzgalov is struggling. Yes, he is struggling in a way he has not in the previous two-plus seasons. Yes, this is concerning.

But the good news is: Bryzgalov is not this bad. He has faced similar adversity before, less than two calendar years ago, and came through it. This year, his double-dip run of poor play has been the result of one bad month.

It is far too early to think this is anything more than an outlier for Bryzgalov. Be concerned, yes. But don't expect this to continue, either.