Will my Winter Classic seats be any good? A definitive guide to watching hockey at Citizens Bank Park

Share All sharing options for: Will my Winter Classic seats be any good? A definitive guide to watching hockey at Citizens Bank Park

One of the biggest problems with actually attending a Winter Classic is the view you'll get of the action after spending hundreds or perhaps thousands on your tickets. You'll drop all that money, only to get to the stadium on game day and realize you can't even see the game.

It's one of the hazards of putting an ice hockey rink in the middle of a venue that was never designed to hold a hockey rink, and it's probably the biggest flaw around the Winter Classic each year. It's only exaggerated when you play the game in a baseball stadium as opposed to a football stadium, of course, considering a baseball diamond is a shaped like a diamond and everything.

And it's the exact problem that many of us will face over the next week when we settle into our seats at Citizens Bank Park for some outdoor hockey, whether that be the Winter Classic on January 2, the Alumni Game or any of the other events down at Pattison & 11th Streets.

So, will your seats be any good? We walked around CBP Wednesday and took inventory, from the rooftop bleachers to the Hall of Fame club and everywhere in between.

Note that there are a lot of pictures below the jump, and it might take a while for the page to load if you're on a slow connection. If you're going to the Winter Classic (or any of the other outdoor events this coming week) and are unsure of your view, however, we guarantee it'll be worth your time. Or, if you just like pictures of a hockey rink at Citizens Bank Park...

We'll start with the worst seats, and the irony is that the worst seats for hockey are the best for a baseball game. Anything close to the field at Citizens Bank Park is going to be absolutely awful for outdoor hockey, as a general rule of thumb.

Simply put, if you're in the Diamond Club, you're going to be watching the game on the scoreboard, not the ice that's about 100 feet in front of you. A view from Section C, which isn't much of a view at all: 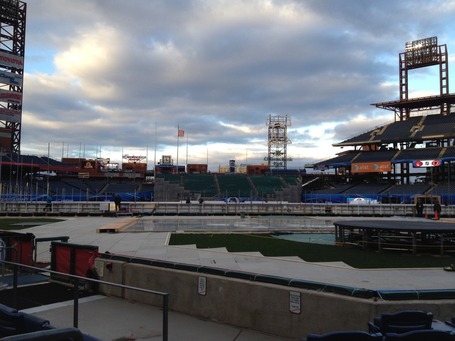 It gets a little better in the lower level if you move up behind the Diamond Club, where you're afforded the center ice location but you can, you know, actually see the ice. Here's a view from right in the middle of Section 125. They're not quite high enough for a great view, and the general rule of "higher the better" still applies, but you'll definitely be able to see the game. 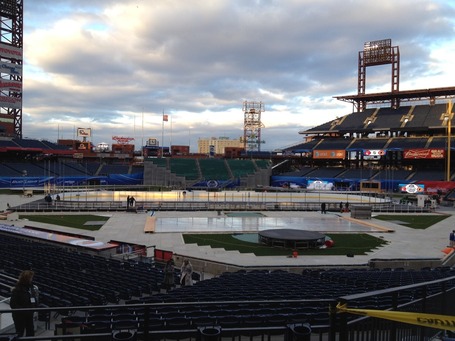 Now, along the baselines in the lower level is a different story. You could either have a pretty fantastic seat or a pretty awful one, and it all depends on what row you happen to be in. We'll demonstrate in Section 111 on the first base side of the baseball field. Here's a view from the top of Section 111: 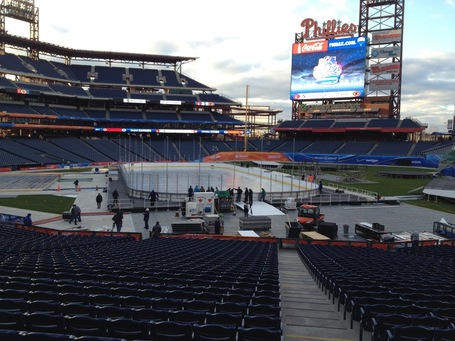 And from the bottom of Section 111: 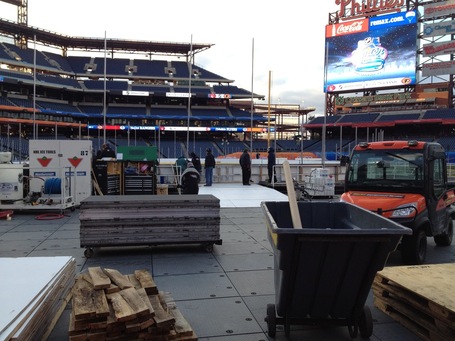 Obviously, all that crap isn't going to be there and in the way on game day, but you can barely even see the ice from this angle. This view applies for basically every section in the infield: the further from the field you are, the better.

The exceptions in the lower level, at least when we're talking on the infield sides of each foul pole, are the sections immediately next to those foul poles: 139 in left field and 108 in right field. The good part of these two sections is that they don't reach all the way down to field level, so even though you might be in the first row of the section, you're still elevated quite a bit.

See what we mean with this view, from the first row of Section 108. Maybe not the best view, but it's certainly not awful either. You can see most if not all of the ice, and that's really all that matters. 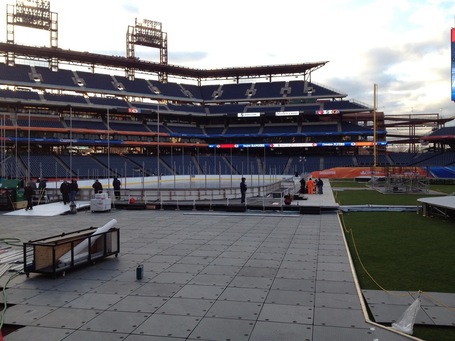 If you're sitting in right field, you're probably pretty lucky. You didn't pay top dollar for your tickets here, at least compared to some of the other locations around the ballpark, but you still have a solid view of the ice, even in the first row of any of the lower level sections in right field. We'll use this view from the first row of Section 105 as an example here: 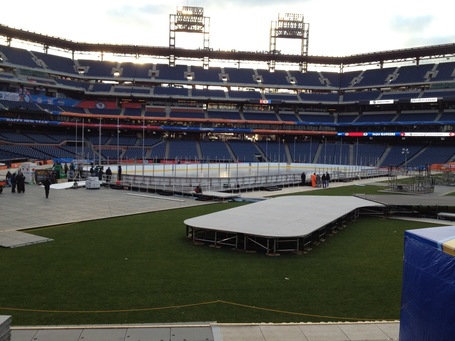 My concern was that as you moved towards center field in the right field stands, you'd have seats with obstructed views thanks to the temporary bleachers that have been set up over the bullpen area in center field. But as it turns out, it doesn't seem like there will be anybody sitting in Section 101, and from Section 102, there are no obstructed views.

Here's a look from the first row of Section 102: 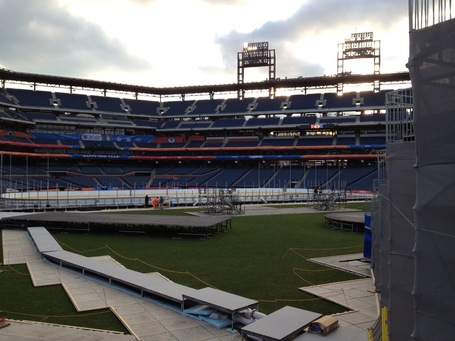 The chief worry in any of the outfield seats is that you have those TV towers to contend with, and there will be decorative banners wrapped around them come game day, just further hurting the view. But for the most part, you'll be able to see the ice pretty well. Better than a lot of people in the infield, at least.

If you're lucky enough to be sitting here, you're going to enjoy the Winter Classic immensely, even if you have to walk across a bridge over the bullpens to get out to your seats.

You're pretty close to the action -- the bleachers literally sit right atop center field -- and the bleachers basically stretch the length of the ice, affording a great view of all the action. Here's a look from the first row of those temporary bleachers -- not sure exactly which section it was considering that signage isn't up yet, but the view is essentially the same from all four sections. 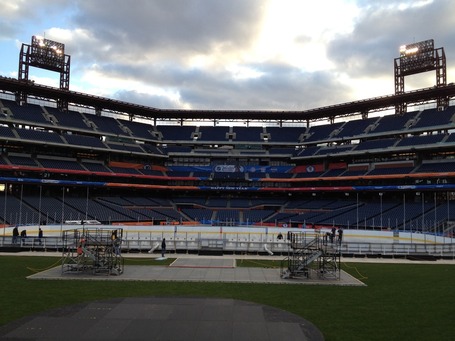 And here's a view from the last row in the temporary bleachers: 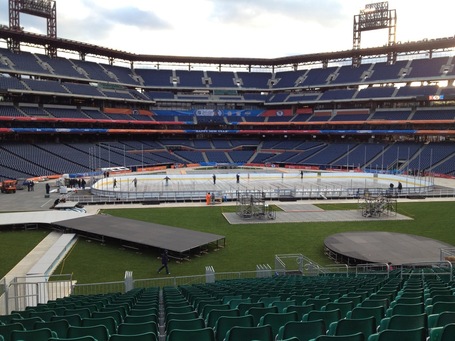 The higher you are, the less of a chance there is of those TV towers getting in your way. Really not a bad view all around, though, even if they do obstruct a lot of the great standing room that would otherwise live out on Ashburn Alley.

The only real downside? Look at what you get to sit on! I've seen metal chairs at the County Fair more comfortable.

There aren't exactly a lot of seats out here, and that's probably for the best, since they're about a mile away from the rink. Then again, as long as people aren't standing up in the temporary bleachers in front of you, it might not be so bad to be sitting under the Liberty Bell out on the rooftop in center field. 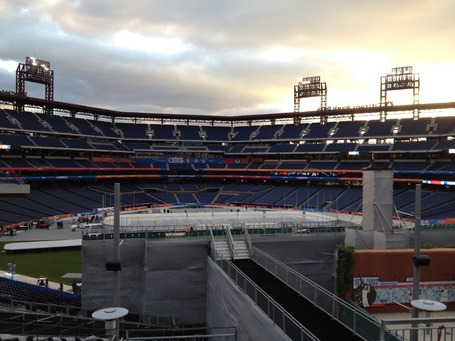 Left field is basically the same deal as right field. Most of the seats are really solid, if you're in the front row or the last row. The higher the better, as is the theme here all over the park, but generally speaking, you should be relatively happy with your seats if you're in any of these seven sections.

There are obstructed views in what's normally called Section 148 for Phillies games, but it doesn't appear as though those seats have been sold for the Winter Classic, even though some of them are exposed next to the temporary bleachers. Here's the first row in Section 144, so you know what you're dealing with from the worst of angles in left field. 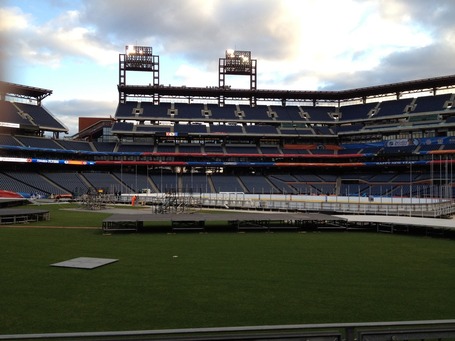 Not the best, not the worst. It gets better the higher you are in the section.

Now that we're moving into the upper sections, we can basically stop with the explanations and just marvel at how wonderful the views will all be. The scoreboard porch is pretty comparable to the view from the Green Monster at Fenway Park in 2010, and that's definitely a good thing. 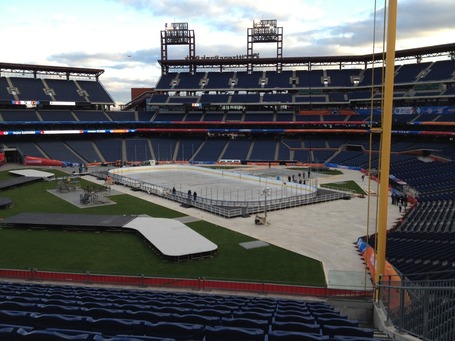 This view from Section 208 gives you a pretty good idea of things look from anywhere in this vicinity. No picture from the 300 level on this side, but it's the same view, just a little higher. 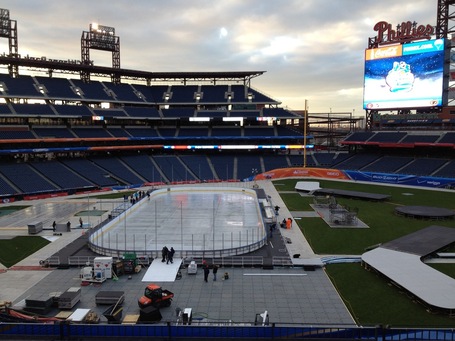 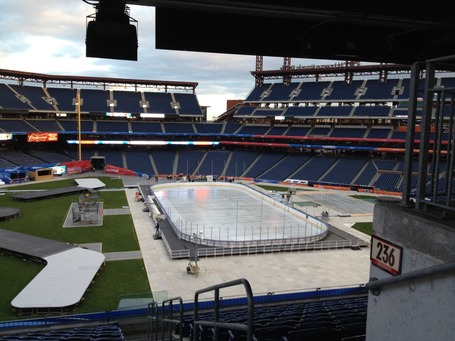 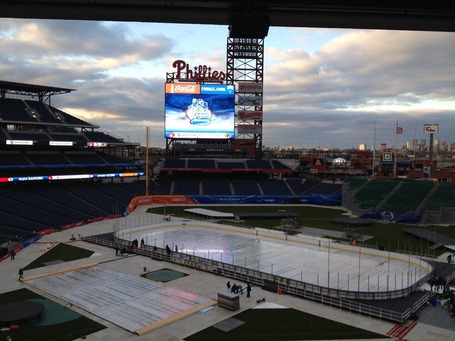 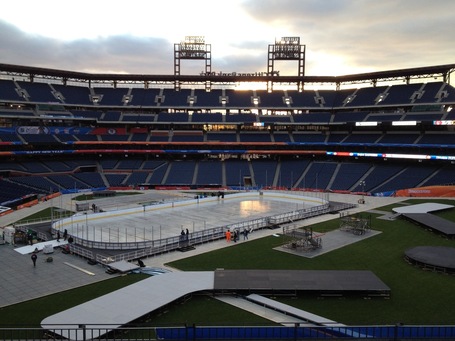 And what might be the worst seat in the house for a baseball game, in the last row of Section 302, is a really great seat for a birds-eye view of a hockey game... 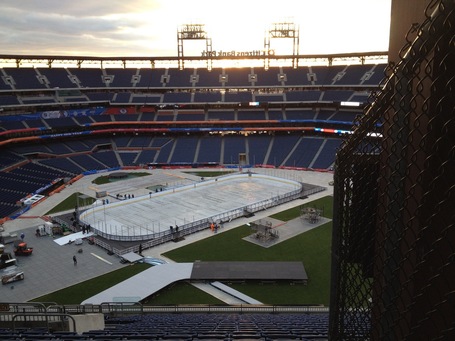 Finally, what might just be the best seats in the house. Here's the view from this level, right behind home plate and center ice in Section 421. 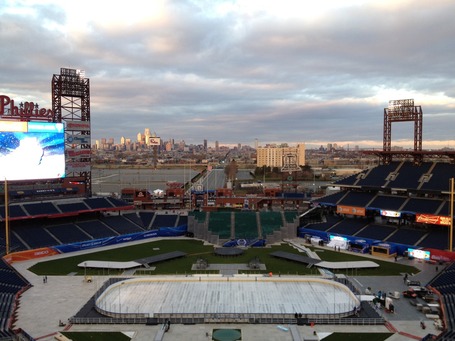