Go to hell, Carolina Hurricanes: Eight things to hate about our newest rival

Share All sharing options for: Go to hell, Carolina Hurricanes: Eight things to hate about our newest rival

Suddenly, the Carolina Hurricanes are one of our newest rivals, thanks to the radical NHL realignment that went down on Monday evening. They join the Philadelphia Flyers in a new "conference" with the other four Atlantic Division teams and the Washington Capitals. The changes go into effect next season.

So we have a new team to hate, and well... let's be real. The Hurricanes are not an easy team to hate. They have a nice, polite Southern fan base, they don't have any players that make you want to throw rocks at your television and most importantly, the Flyers always kick their asses on the ice.

This is going to be difficult, but... well, here are eight reasons to hate the 'Canes.

1. You thought Sidney Crosby was a whiny little jerk? He's got nothing on Jeff Skinner.

EVIDENCE HERE. So sad that CSN took the video off of YouTube, but go read anyway.

AND HERE, via Japers' Rink: Click to animate the .GIFs below. We don't want to slow down your browser. They'll open in a new window/tab.

By all accounts, Rod Brind'Amour was ours. He was a member of the Philadelphia Flyers, and even though he was traded for Keith Primeau, he was one of those guys that would always be a Flyer, no matter what.

But then he had to go and win a damned Cup with the Hurricanes. And then they retired his number. And then they offered him a player development job. And then a coaching job.

Now, Rod Brind'Amour is a Carolina Hurricane. His Flyers ties are essentially gone. Here's him speaking last season, on the night the 'Canes retired his number in a game against the Flyers, about his legacy in Carolina:

"Well, it's funny that you say that because I don't really think along those lines, but after winning that championship, that did it. I don't think there could have been a better way of going out. I think if I had won maybe before in Philadelphia, things might have been different. But obviously when you win, there's nothing greater than that, and there's no better way to be remembered. I know that I'll be remembered as a Hurricane, and that image I guess of me being able to hold that Cup is something that around here is quite etched in stone. This is my home now, so I realize that and I'm just grateful that I'm remembered at all, to be honest with you."

The Carolina Hurricanes are the other guy. (Or the other girl, whatever.) 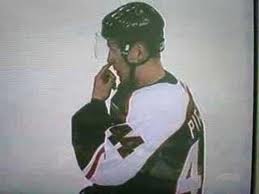 The most notable thing Joni Pitkanen ever did as a Flyer was pick his nose and eat its contents on live television. (There used to be a YouTube video of it, but it's apparently gone. Darn.)

That's not totally fair, I guess. Pitkanen was a solid piece on the Flyers' blueline for the several seasons he was here, and I'm going off of memory here, but I think he led them in ice time on defense for at least two of those seasons.

Still, he didn't really live up to the ultimate hype after being drafted at 4th overall by the Flyers in 2004, and he was ultimately shuffled to Edmonton before winding up in Carolina.

There, he's become a No. 1 defenseman. He plays in all situations, scores, moves the puck very well. He's not the No. 4 overall pick in hindsight, but it's still a little frustrating that he's such an important piece for them, given how much the Flyers could use him as Kimmo Timonen and Chris Pronger continue to age.

We had a war with the South, man.

5. The Hartford Whalers were so much better. 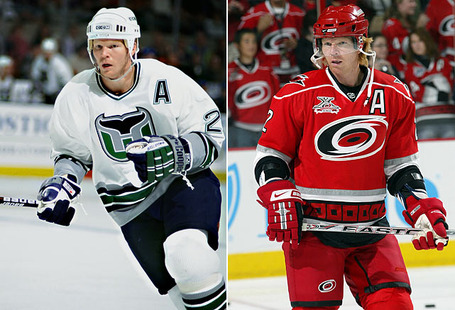 Which looks better? This isn't debatable.

I was at the All-Star Game in Raleigh back in January. I have family in North Carolina. I've been there quite a bit, and I can attest that there are a lot of transplants down there. A lot of them are obnoxious New Yorkers, too. Probably grew up Rangers fans, might just be Hurricanes fans now.

On the bright side, I guess the pizza is halfway decent.

8. They have a Stanley Cup.

Hockey fans in North Carolina celebrated a Stanley Cup in 2006. We haven't had that party since 1975. And not only did they win the damned thing, they did it with Brind'Amour and the guy who is now our coach. If that's not enough to piss you off and make you recent everything red and black, well... just go watch those Jeff Skinner .GIFs again.